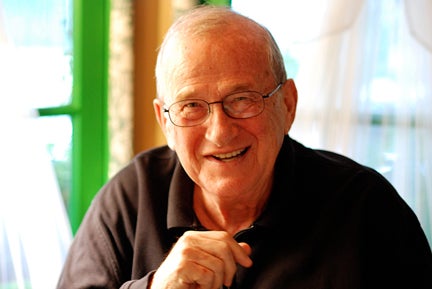 Larry Gelbart, the comedy writer who developed the TV series "M*A*S*H" and co-wrote the film "Tootsie," died Friday morning at his home in Beverly Hills. He was 81.

Gelbart was diagnosed with cancer in June, his wife told the Los Angeles Times.

("I'm still getting turned down," Gelbart told TheWrap back in January. Read the full interview.)

He co-wrote the book "A Funny Thing Happened on the Way to the Forum" with Burt Shevelove and watched the work go on to become a Broadway smash in 1962 with aid from Stephen Sondheim's musical score. The play ran on Broadway for over two years and won a Tony Award for best musical.

When the play moved to London, Gelbart and his family followed and lived in the city for nine years. During that time, he wrote the 1966 comedy film "The Wrong Box" and a number of westerns for Clint Eastwood.

He traveled back to Los Angeles to write the iconic 1970s series "M*A*S*H," which he wrote 97 episodes for during its 11-year run.

Set in an Army hospital during the Korean War, "M*A*S*H" was extremely popular and won an Emmy for outstanding comedy series in 1974.

"Larry not only had the wit and the jokes," the show's producer and director Gene Reynolds told the New York Times in 1989, "he had a point of view. He not only had the ribald spirit, he had the sensibility to the premise — the wastefulness of war."

Gelbart also received an Oscar nomination for his 1977 screenplay for "Oh, God!," a film starring George Burns and John Denver.

Another Academy nod for his screenwriting came for "Tootsie," the 1982 comedy in which Dustin Hoffman dresses as a woman to get a job and becomes a star.

Born Feb. 25, 1928, in Chicago, Gelbart's career began when he was only a 16-year-old student at Fairfax High School in Los Angeles. His father, a Beverly Hills barber, often told his clients — including comedian Danny Thomas — how funny his son was. As a result, Gelbart was soon writing for "Duffy's Tavern" and radio shows starring the likes of Bob Hope and Jack Paar.

Soon after, Gelbart served in the Army with the Armed Forces Radio Service for just over a year. He wrote for the Army's "Command Performance" but still continued to write bits for Joan Davis and Paar.

In 1950, he began working in television with Hope and joined Mel Brooks and Neil Simon on the writing staff of "Caesar's Hour" five years later. While working on the show, he shared three Emmy nominations for comedy writing in 1956, '57 and '58.

In 1976-78, he wrote another Broadway comedy based on Ben Jonson's "Volpone" called "Sly Fox." He also penned the book for the 1989-92 Broadway comedy musical "City of Angels," for which he won a Tony.

He continued writing until three weeks ago, his wife told the LA Times.