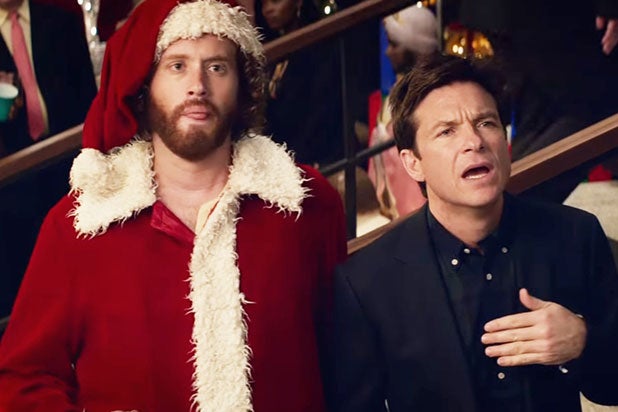 “Office Christmas Party” raged to a strong $950,000 at the Thursday box office.

In the days leading up to the film’s opening, tracking was all over the place. Experts saw the film open anywhere between $20 million to $29 million, with Paramount being more conservative with a range of $13 million to $15 million.

Comparably, last year’s “Sisters,” which opened up against “Star Wars: The Force Awakens,” earned $769,000 on Thursday and went on to earn $13.9 million over the three-day opening weekend. When Seth Rogen’s holiday-themed comedy “The Night Before” opened last year, as well, it grossed $550,000 on Thursday. Last month’s ensemble comedy “Almost Christmas” earned $507,000.

“Office Christmas Party” stars Jason Bateman, Jennifer Aniston, Olivia Munn, T.J. Miller, Jillian Bell, Courtney B. Vance, Rob Corddry and Kate McKinnon and was helmed by directing duo Josh Gordon and Will Speck (2007’s “Blades of Glory”). It was made for $45 million, not counting marketing costs, and is set to open in roughly 3,100 locations.

The Paramount, DreamWorks and Reliance Entertainment title is rated R and currently holds a score of 43 percent on Rotten Tomatoes. The movie stars Aniston as a company CEO trying to thwart the success of her hard-partying brother (Miller) and his CTO (Bateman). The two guys have to rally their co-workers and host an epic office Christmas party in an effort to impress a potential client and close a sale that will save their jobs.

Chastain’s R-rated mystery, which has a 64 percent approval rating from critics on Rotten Tomatoes, centers on the most formidable lobbyist in Washington, D.C., as she takes on a powerful opponent. It has so far amassed $135,869 in its very limited release. The film is not expected to exceed $5 million over the three-day weekend.

Focus Features’ moody thriller “Nocturnal Animals” is expanding in its fourth weekend, having earned $2.9 million so far in limited release. Written and directed by fashion designer and filmmaker Tom Ford, it stars Adams as an art gallery owner who can’t shake threatening thoughts inspired by the writings of her ex-husband (Jake Gyllenhaal), who penned a violent revenge-themed novel which she takes to heart. It has a 72 percent approval rating on Rotten Tomatoes.

The big question will be whether “Office Christmas Party” will topple the reign of Disney’s “Moana,” which was released on Nov. 23 and has earned $124 million so far. If the comedy does earn between $20 million and $29 million, it should be enough to boot “Moana,” starring Dwayne Johnson, from first place.