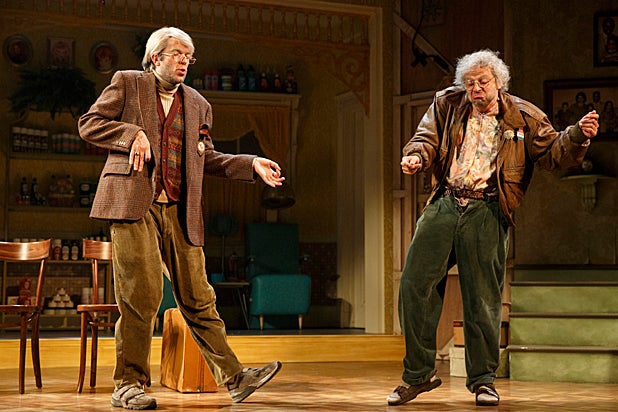 Whatever happened to the great comic duos? Movies and TV used to give us at least one a generation: Laurel and Hardy, Hope and Crosby, Lewis and Martin, Rowan and Martin. Did “Saturday Night Live” somehow end that streak? Did comics suddenly not want to share the spotlight?

Comedy Central’s Nick Kroll and John Mulaney had the promise to revive the male comedy team with their oft-performed skit “Oh, Hello,” about two nerdy old men from Manhattan’s Upper West Side who host a public-access show called “Too Much Tuna.” The big problem with “Oh, Hello on Broadway,” which opened Monday at the Lyceum Theatre in New York, is that Mulaney doesn’t deliver. He’s neither the classic straight man who sets up the zany alpha male (Kroll) nor is he an even mildly amusing caricature in his own right.

Mulaney’s failed novelist George St. Geegland never begins to approach the raw veracity of Kroll’s failed actor Gil Faizon. Even the 34-year-old actor’s powdered hair and beard look fake. The 38-year-old Kroll, on the other hand, totally convinces as one of those guys who looked 70 the day he flunked out of Columbia and never changed until he actually was 70. And that includes his corduroy trousers. At one point in the show, the two men describe walking into the lobby of their apartment building, which, they reveal, “smells like very good soup.” Kroll has that smell. Mulaney doesn’t.

Their characters share a diffuse, off-center comic patter that promises to be much raunchier and offensive that it ever delivers. Jokes fly about the Holocaust, 9/11, O.J. Simpson’s Bronco chase, and other crimes: “Gil’s hair is like the JonBenet Ramsey case. The more you look into it, the more questions you have.” Unfortunately, there’s also talk about Gil having to leave the stage to go to the bathroom because his not-yet-ejected stool has gotten “pointy.” (Sorry for that full disclosure, but it doesn’t play any better in the Lyceum.)

Taking “Oh, Hello” from the small screen to Off Broadway to Broadway has made the show grow in ways in probably shouldn’t. Scott Pask’s set design includes elements from “Steel Magnolias,” “I Am My Own Wife,” “The Cosby Show,” and an August Wilson play (take your pick). Gil and George take much time to describe the hair-dryers, the antique record players, the stoop, the family portraits. But there’s no comic payoff. Better are their attempts to replicate the preciously vague final lines of plays produced at some of the city’s more pretentious nonprofit theater companies. How Gil and George, who are being evicted from the $75-a-month rent-controlled apartment on West 73 Street, got the money to see these plays is never explained.

The 95-minute one-act “Oh, Hello on Broadway” often resembles a “Pee-wee’s Playhouse” for the post-millennial crowd. And no surprise, it’s directed by Alex Timbers, who brought “The Pee-wee Herman Show” to Broadway a few seasons ago and has never fully recovered.  Giant tuna sandwiches with blinking human eyes keep appearing in various forms on stage. It’s better not to eat before seeing the show.