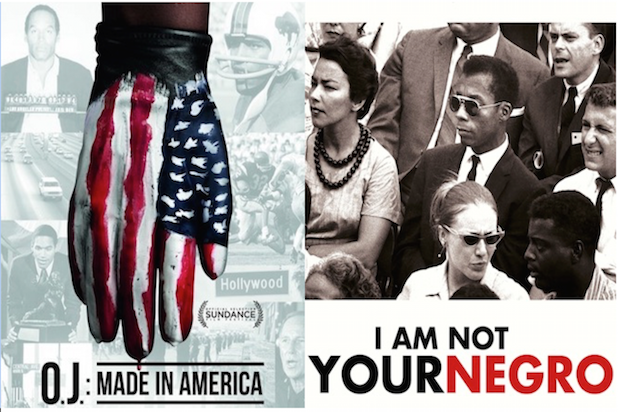 “Fire at Sea,” “Cameraperson,” “Weiner,” “I Am Not Your Negro” and “O.J.: Made in America” have been nominated as the best documentaries of 2016 by Cinema Eye Honors, the New York-based organization devoted to nonfiction filmmaking.

Cinema Eye announced its 10th annual nominees on Wednesday evening at the Alamo Drafthouse in New York City. Its awards ceremony will be held on Jan. 11 at the Museum of the Moving image in Astoria, Queens.

The nominations in the Outstanding Achievement in Nonfiction Feature Filmmaking category marked an unprecedented overlap with the Los Angeles-based IDA Documentary Awards, which announced its nominees on Tuesday and is the other major award for nonfiction filmmaking. All five films were nominated by both groups; a sixth IDA nominee, Ava DuVernay’s “13th,” was not eligible for the Cinema Eye Honors.

With the deadline approaching for first-round voting in the Oscar documentary race, that makes “Cameraperson,” “Fire at Sea,” “I Am Not Your Negro,” “O.J.: Made in America” and “Weiner” rare consensus picks for the best nonfiction films of the year, and puts them in a strong position to make the Oscar’s 15-film shortlist.

Two films that focus on race in America, Raoul Peck’s “I Am Not Your Negro” and Ezra Edelman’s “O.J.: Made in America,” led all works with five nominations each. Kristen Johnson’s personal essay “Cameraperson” and Gianfranco Rosi’s cinema verite look at Europe’s migrant crisis “Fire at Sea” received four nominations.

Rosi landed four individual nominations for directing, producing and shooting “Fire at Sea,” while Edelman, Johnson, Peck and HBO Documentary Films chief Sheila Nevins received three each. Nevins is now the most nominated person in Cinema Eye history with 11, a distinction she also holds at the Emmys.

Several other strong Oscar contenders showed up in the 10 Audience Choice Prize nominees, which included “I Am Not Your Negro” and “Weiner,” but also went for “Gleason,” “Life, Animated,” “Sonita,” “Ticked,” “Tower,” “Mr. Gaga” and the music docs “Miss Sharon Jones!” and “Presenting Princess Shaw.”

Because of Cinema Eye eligibility rules specifying that films must play a certain number of top festivals or make $20,000 at the North American theatrical box office, several high-profile but late-breaking Netflix films, including “13th,” “The Ivory Game” and “Amanda Knox,” were not eligible to be nominated.

The Cinema Eye Honors were established in 2007 to honor all facets of nonfiction filmmaking. Nominees are determined by several nominating committees made up largely of programmers from film festivals that showcase nonfiction work.

Over the first decade of the awards’ existence, Cinema Eye Honors nominations have not typically overlapped strongly with the Oscars documentary nominations. While three of last year’s Best Feature nominees went on to receive Oscar nods, only nine of the 28 Cinema Eye nominees over the last five years did so.

Since the first Cinema Eye ceremony in 2008, the only films to win the top awards from Cinema Eye and the Academy are “Man on Wire,” “The Cove” and “Citizenfour.”

“I Am Not Your Negro”
Directed by Raoul Peck| Produced by Rémi Grellety, Raoul Peck and Hébert Peck

“Weiner”
Directed and Produced by Josh Kriegman and Elyse Steinberg

Outstanding Achievement in Nonfiction Films Made for Television

“Making a Murderer”
Directed and Produced by Laura Ricciardi and Moira Demos
For Netflix: Lisa Nishimura and Adam Del Deo

Outstanding Achievement in Original Music Score
Lubomir Grzelak, “All These Sleepless Nights”
Nominees to be Determined, “Contemporary Color”
Alexei Aigui, “I Am Not Your Negro”
Alex Lu, “In the Pursuit of Silence”
Gary Lionelli, “OJ: Made in America”

From “The U” to “The Two Escobars,” we count down the 30 greatest documentaries that ESPN’s critically-acclaimed series has gifted us

The five-part "O.J.: Made In America" marks a watershed moment for "30 for 30," the ESPN documentary series that has proven to be one of the best concepts the network has ever come up with. Co-created by Connor Schell and Bill Simmons in 2009 to chronicle 30 stories from the "ESPN era" beginning with the network's founding in 1979, the series has elevated filmmakers, creating unforgettable works that have received awards, critical acclaim and festival selections many times over.

Also Read: ESPN’s ‘OJ: Made in America’ Documentary: 7 Things You Need to Know