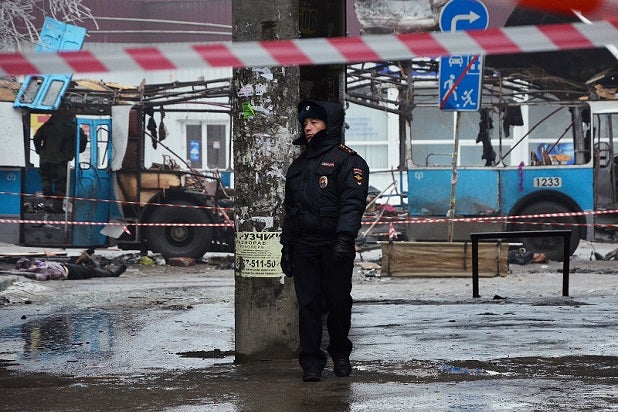 NBC, which will air the upcoming Winter Olympics in Sochi, Russia, has responded to the deadly bombings that have rocked the Russian city of Volgograd in the past two days, saying that “every precaution” is being taken in light of the attacks.

A spokesperson for NBC Olympics said Monday that the organization is “working with numerous domestic and international government agencies.”

“The safety and security of our employees and guests has always been our top priority. We are taking every precaution to ensure their safety, including working with numerous domestic and international government security agencies on an ongoing basis,” the spokesperson said.

The president of the International Olympic Committee  condemned the bombings Monday, calling them a “despicable attack” and a “cowardly act,” but nonetheless adding that the upcoming games, which kick off in February, will be marked by a “message of tolerance.”

“This is a despicable attack on innocent people and the entire Olympic Movement  joins me in utterly condemning  this cowardly act,” IOC president Thomas Bach said in a statement Monday, after a second bombing took place. “Our thoughts are with the loved ones of the victims.”

Monday’s bombing, which killed at least 14 people, according to CNN, took place the day after an iniital strike took place on a trolley, killing 17 and wounding at least 35 people. Authorities suspect that both attacks were the work of suicide bombers, CNN reports.

Bach noted that he had reached out to Russian president Vladimir Putin to “express our condolences to the Russian people,” and to express “our confidence in the Russian authorities to deliver safe and secure Games in Sochi.”

The attacks took place just over 400 miles from Sochi, where the 2014 Winter Olympics will kick off Feb. 7.

Acknowledging that terrorism is “a global disease” that “must not be allowed to triumph,” Bach emphasized the unifying spirit of the Olympic games, adding that the Committee has received “many declarations of support and solidarity from the international community.”

“Sadly terrorism is a global disease but it must never be allowed to triumph. The Olympic Games are about bringing people from all backgrounds and beliefs together to overcome our differences in a peaceful way,” Bach said. “The many declarations of support and solidarity from  the international  community make me confident that this message of tolerance will also be delivered by the Olympic Winter Games in Sochi.”