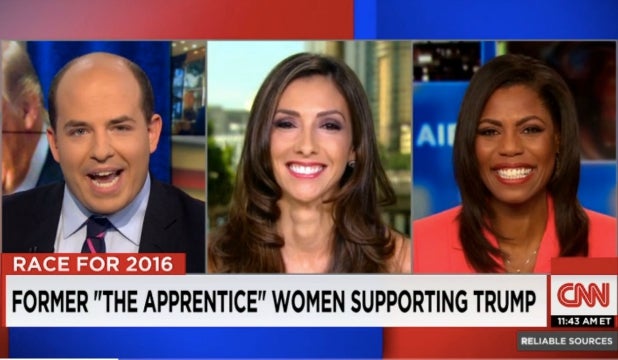 Donald Trump’s former “Apprentice” candidates have rushed to his defense in the wake of his debate dust-up with Fox News’ Megyn Kelly.

Omarosa Manigault, one of the best-known contestants from “The Apprentice” — the reality series Trump used to host for NBC — called out Kelly Sunday on CNN’s “Reliable Sources” for her questioning of Trump at Thursday’s Republican presidential debate.

Kelly pressed Trump about his past use of derogatory comments to describe women. On Friday, Trump told CNN’s Don Lemon that Kelly had “blood coming out of her wherever,” an apparent reference to menstruation.

“Look, it’s so clear to me that Megan Kelly had a bone to pick with Donald Trump,” Manigault told “Reliable Sources” host Brian Stelter Sunday. “Everyone saw it.”

She added that Trump is “very good at reading people’s intentions,” and Kelly did not give Trump “a fair chance of showing where he stands on women’s issues.” Kelly, she said, should have asked Trump about reproductive health and the minimum wage.

Katrina Campins, another Season 1 veteran of “Apprentice” who currently works with Trump, also defended the candidate, saying, “I don’t think he has a problem with women.”

Trump has since backed away from his comments about Kelly, claiming that he was not making a reference to menstruation.