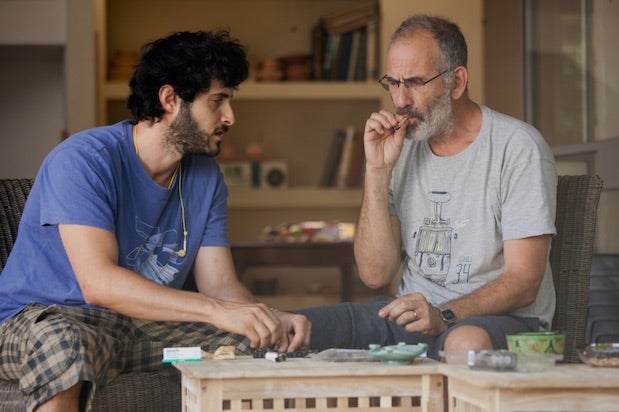 Tears of laughter and tears of grief are both in abundant supply in Asaph Polonsky’s uproariously funny and heart-wrenchingly moving “One Week and a Day.” Playing in the Critic’s Week sidebar in Cannes, the film examines the grieving process through a haze of pot smoke and sly humor.

“One Week and a Day” takes place in the time immediately after the ritual seven days of mourning — the shiva — mandated by the Jewish faith. In some ways, that is the most difficult time of all. After seven highly regimented days, structured by food and friends and prayer, those in mourning are cast back into their quote-unquote normal lives.

Such is the situation middle-aged couple Eyal and Vicky Spivak find themselves in following the death of their son. The film picks up as the last guests leave, when the Spivaks are expected to rally and get on with it. While Vicky tries to get right back to work, Eyal finds himself totally at odds, and instead jumps headfirst into a bag of a medicinal weed left behind at the hospice. “It’s our inheritance,” he reasons.

The thing is, Eyal’s never smoked before, so into the picture comes his late son’s former best friend, the goofy neighbor Zooler. (Hey, somebody’s got to roll the joints.) You could compare what follows to a bleary-eyed “Friday,” if that Ice Cube stoner flick was set in Israel and was all about death.

Together the grieving father and the type-A underachiever embark on a series of low-energy hijinks while diligently smoking their way through that bag.

Polonsky shoots in wide shots and long takes, and keeps the action onscreen well-lit in a proficient, workmanlike way. His techniques don’t give the film much of a distinct visual imprint, but punch twice their weight when it comes to setting the tone.

That much of the film takes place in a house and backyard, most of which are visible in nearly every deep-focus shot, reinforces the idea that the mundane can feel overwhelming at such a taxing moment.

The limited setting — the couch where Zooler practices his sublimely stupid air-guitar routine is the very same couch where, not minutes before, Eyal sat nearly catatonic from despair — effectively sets the stage for bitter and sweet to coexist.

By this point, the bittersweet poigna-comedy is a genre in and of itself (indeed, you can find at least a dozen at every Sundance) but none match this film’s precise balance of silly, sad and strange. The laughs aren’t offered as a reprieve from the grief, but as a byproduct of it. Though getting high with a doofus is probably not the best course of action for a grieving middle-aged man, the film gently reminds us that both the pot and the neighbor are among Eyal’s last tangible connections to his late son.

“One Week and a Day” succeeds in recreating that precise feeling, as hard to articulate as it is commonly felt, where exhaustion wears down any line between emotions. Sometimes, the film remarks, pain can feel so raw it’s funny.