The Academy has yet to announce this year’s slate of artists and executives who’ve been invited to become members, but AMPAS president Tom Sherak may have let one name slip at Saturday night’s Student Academy Awards.

Beaming, Renner walked onstage and said, “Yeah, that does sound good, doesn’t it?”

The list of invitees is normally made public in late June, after nominations have been made by executive committees in each branch, and then approved by the AMPAS Membership Committee and Board of Governors. 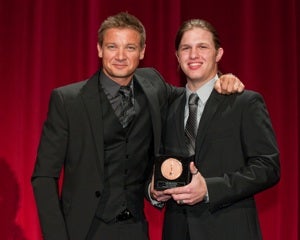 Oscar nominees do not automatically qualify to become members, but many of them receive invitations within a few months of their nominations. In recent years, actors that have been invited after receiving nominations include Anne Hathaway, Melissa Leo, Michelle Williams, Marion Cotillard, Eddie Murphy, Jackie Earle Haley, Joaquin Phoenix, Heath Ledger and Jake Gyllenhaal.

Besides Renner, actors who might expect to be invited this year include Christoph Waltz, Carey Mulligan, Gabourey Sidibe and Mo’Nique.

But a more intriguing situation might exist in the Academy’s Producers Branch, which passed over “Avatar” producer Jon Landau even after the previous film he produced for James Cameron, “Titanic,” won 11 Academy Awards and became the top-grossing film of all time.

At theWrap’s awards-season party back in March, Landau said that his name had been submitted twice in the past, and that he was rejected both times. “If they don’t invite me this year, that’s it,” he said, “I’m never going to join.”

Since new rules were passed in 2004, the Academy has invited fewer than 150 people to become members each year, in an attempt to keep AMPAS membership at about the same level. (For the last Oscar season, there were 5,777 voting members.)