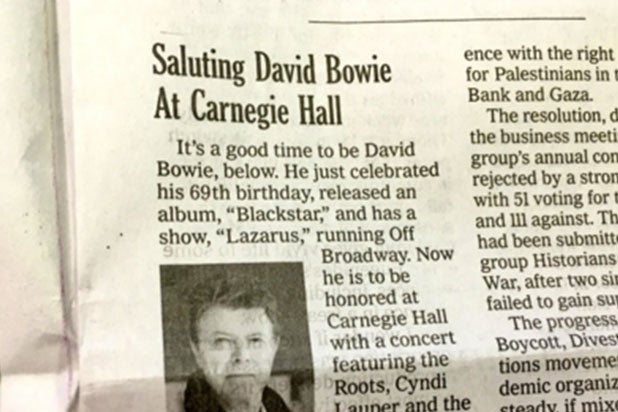 Just 24 hours after pop icon David Bowie passed away from cancer at the age of 69, the New York Times published a story leading with, “It’s a good time to be David Bowie,” and the paper is getting lambasted for it.

However, a New York Times spokesperson told TheWrap that the article was written before Bowie died on Sunday.

“The paper had gone to print with the Arts, Briefly item before news of Bowie’s death broke,” the spokesman said.

The New York Times story read, “It’s a good time to be David Bowie. He just celebrated his 69th birthday, released an album, ‘Blackstar,’ and has a show ‘Lazarus’ running Off Broadway,” the print edition reads. “Now he is to be honored at Carnegie Hall with a concert featuring the Roots, Cyndi Lauper and the Mountain Goats.”

The first line, which has now been criticized by many fans, has been removed from the online version, but according to Mediaite, the Carnegie Hall event will still occur has planned.

The Chicago Tribune ran a story over the weekend with the headline, “Bowie Finds His Future” in his newest album, “Blackstar.”

See the NY Times story below.

Page C3 of today's NYT in print: "It's a good time to be David Bowie." pic.twitter.com/XZviPXDgLH