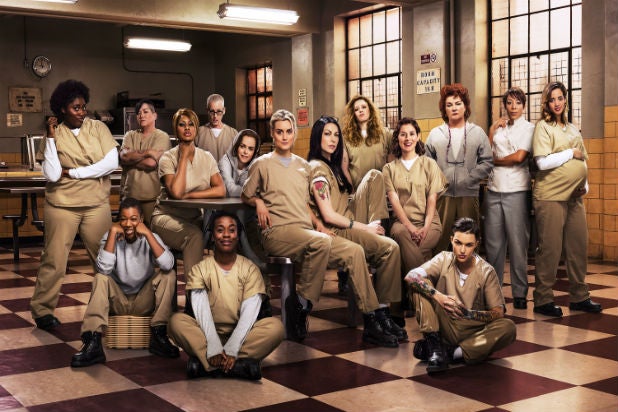 For those of you who didn’t get an early start on the new season of “Orange Is the New Black,” TheWrap has a spoiler-free look at season three courtesy of your favorite ladies of Litchfield Penitentiary.

Kate Mulgrew, who plays prison den mother Red, told TheWrap that viewers are in for a surprise with her character this season. “I won’t spoil it, but at the very foundation of Red’s nature, she will not suffer — she will not tolerate betrayal, least of all among those she loves,” Mulgrew said.

Alex Vause (Laura Prepon) will also grapple with some tough emotions in season three. “When I first started shooting season three, [series writer/executive producer Jenji Kohan] said Alex is a wounded bird,” Prepon told TheWrap. “It was really interesting for me to play because it pushed me out of my comfort zone.”

Also Read: 'Orange Is the New Black's' Danielle Brooks to Debut on Broadway in 'The Color Purple'

And everybody’s favorite crazy Christian inmate, Pennsatucky, will become more likable this season, according to Taryn Manning. “I’m excited that you get to see another side to this one-dimensional person that’s jumping off the screen, this sort of mean bully,” Manning told TheWrap. “I do think you’ll get to see a lighter side to her.”

“There’s no secret why Jen Euston won an Emmy for casting,” Prepon said of her castmates. “It’s such an incredible mosh pit of wonderful actresses.”

The trio also pontificated on the show’s appeal. “It speaks to something fundamental in all of us, especially women,” Mulgrew said. “So it is generous, and it is electrifying.”

“I can’t say like myopically that it’s this show,” Manning said, “but even this pilot season, I know that they were looking a lot for female-driven shows with female leads — female crews even.”

See video: 'Orange Is the New Black' Gets Season 4 Renewal From Netflix (Video)

“I don’t think Jenji set out to write an exposé, but she’s a phenomenal writer and she doesn’t shy away from anything,” Prepon said. “Nothing is taboo for her.”

The actresses also revealed which character they would play other than their own. While Prepon expressed her love for Pennsatucky, Mulgrew said she would love to play either Lorna Morello or Aleida Diaz, mother of pregnant inmate Dayanara.

Manning, meanwhile, said she would like to play series lead Piper. “Kind of a fish out water, adapting, adjusting completely beside herself. You know, wrong place at the wrong time,” she said. “I think that’s a really cool role because it’s a ton of different shades.”

“Orange Is the New Black” season three is currently streaming on Netflix.