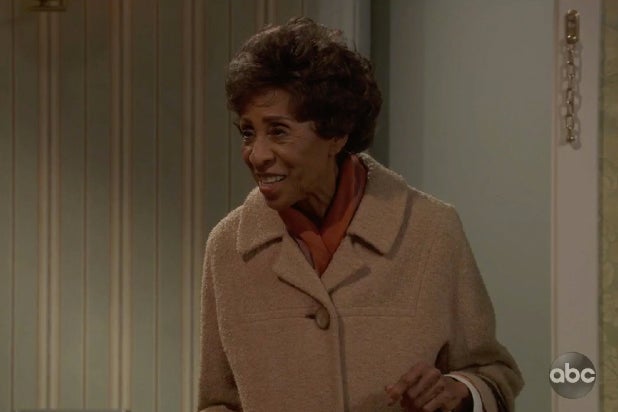 The episodes of “All in the Family” and “The Jeffersons” that Jimmy Kimmel re-staged on ABC Wednesday night may have been decades old, but that doesn’t mean they didn’t come with a few surprises.

Right at the end of the 90-minute live tribute to Norman Lear, one original “Jeffersons” cast member  popped in for a surprise appearance, re-inhabiting the role she first played nearly 50 years ago.

For 11 seasons beginning in 1975, Marla Gibbs starred as Florence Johnston, the wisecracking maid to the Jeffersons, and she is one of the only surviving members of the show’s main cast.

Justina Machado, who starred in Lear’s “One Day at a Time” reboot on Netflix, was supposed to inhabit the role in the ABC experiment, but when the character finally appeared on screen at the end of the episode, it was Gibbs.

Marla Gibbs is the only surviving member of the core Jeffersons cast.

I almost fell out my chair when Marla Gibbs walked through the door!!! #TheJeffersons pic.twitter.com/zH3RlVCuXe

The 90-minute primetime live special re-created one episode each from the Norman Lear sitcoms “All in the Family” and “The Jeffersons,” featuring an all-star cast led by Woody Harrelson and Marisa Tomei starring as Archie and Edith Bunker, and Foxx and Sykes as George and Louise Jefferson.