Forty years ago  — on July 20, 1969 – audiences watched in awe as Apollo 11 landed on the moon. The historic moment was captured at the time on high quality tapes, along with Neil Armstrong’s first steps on the lunar surface and the planting of the American flag.

Those tapes, however, no longer exist. NASA admitted at a press conference on Thursday in Washington that the tapes have been lost or recorded over — or, as NASA called it, “degaussed.” 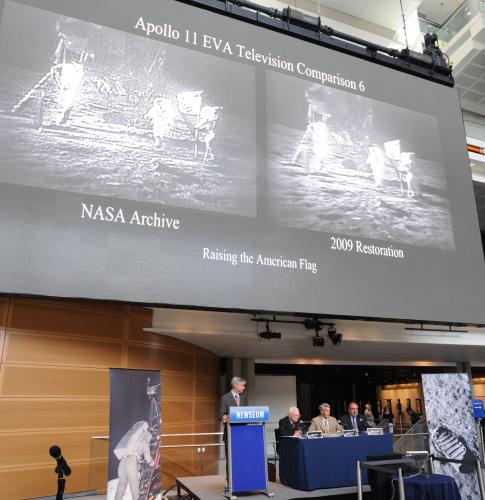 Richard Nafzger, a NASA engineer who put the original video procedures together and now is in charge of projects like the space shuttle, said a NASA team had looked high and low for the original tapes but had been unable to find them.

But they do know that they are gone.

So, what’s left for historians and NASA researchers? Kinescopes, VHS recordings from TV stations and even a video transfer from 8mm that was shot pointing at a TV set.

NASA’s focus at the time, Nafzger said, was on being able to broadcast a signal live from the moon — not preserving the results. The mission ended up being spread over 45 tapes, which were eventually shipped to a U.S. government records center — which apparently didn’t realize what it had, he said.

So, lacking the original tapes, NASA is doing the next best thing to preserve the landmark landing:  A massive, $230,000 project is nearly completed to restore two and half hours of the still-available footage.

It previewed 15 minutes of the work-in-progress during the press conference. Included were the iconic images of Armstrong descending the steps of the lunar excursion and the planting of the American flag. (To see video, go to NASA’s site.)

Lowry Digital, a Burbank-based company under the Reliance umbrella that specializes in film restoration, is handling the project. The footage is being digitally restored with a version of the process that has been by used by Lowry on than 400 classic films, including “Singin’ in the Rain,” “Casablanca” and “The Robe.”

According to Lowry Digital COO Mike Inchalik, fortunately there is enough material to create a final film, which will be used mostly for research and is not expected to be made available commercially.

“Given that the original recordings did not survive, our ability to recover picture detail and eliminate increased noise and other artifacts introduced later was crucial,” Inchalik told TheWrap. “The disparate source elements each had their own unique issues, and we developed new tools to address them.”

The target for completion of the project is September, when Lowry plans deliver the restored images in high definition to the agency.

One interesting side note from the press conference: NASA was asked several times whether it was worried that using Hollywood people for the restoration would reinforce suggestions the moon walk was, in fact, done on an L.A. studio.

The questions were quickly dismissed.