If there’s one aspect of American life that does need a second act, it’s the Oscars campaign. Landing the nomination may be a long, grueling process that requires money, strategy and ingenuity, but most films can’t just coast to an Oscars win after the nomination.

For years, the Weinstein Company was the master of finding a new message that resonated in the final weeks of voting, including the line from “The King’s Speech” campaign, “find your voice.” But TWC doesn’t have a horse in this race, leaving the phase-two adjustments to Open Road, Fox and Paramount, among others.

This survey of the Oscars ad campaigns’ endgame sticks to the hugely competitive Best Picture category. It’s tempting to throw in Netflix’s over-the-top spending in the typically more subdued Best Documentary Feature category, including the ad-bedecked truck it hired to circle the recent WGA and DGA shows. But that’s just Netflix, which wants an Oscar very badly and has the money to pull out all the stops.

Here are four other films that want an Oscar badly — and who, for the most part, are making their plea for that Oscar by emphasizing how significant the films and their subjects are. 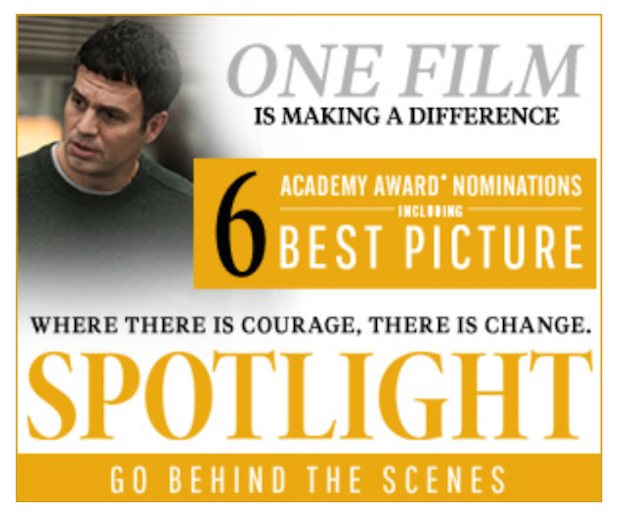 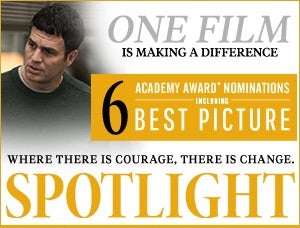 The movie: “Spotlight”
The message: “We’re the important movie.”
“Spotlight” came into the race backed by a small company, Open Road, which had never gone all the way with an Oscars campaign. But of the major contenders, it was the first to unveil its phase-two campaign. And considering that a key strategist on the film worked on Weinstein’s campaigns for many years, it’s no surprise that it played the “Importance” card, hardly a stretch for a film about clergy sexual abuse and cover-up in the Catholic Church, and the newspaper investigation that exposed it.

The home-stretch campaign has shifted the focus of attention from the real-life reporters played by the actors in the film (who were front-and-center during the pre-nominations campaigning) to the survivors of sexual abuse.

A recent billboard on the Sunset Strip, for instance, showed a scene from the film in which Rachel McAdams‘ character is interviewing a survivor with the caption, “THEIR COURAGE CHANGED THE WORLD” — they, in this case, clearly being the survivors who spoke out rather than the journalists who documented it.

With survivors attending Q&As and awards shows, where they receive onstage shout-outs, and with the film screening for a Vatican sex-abuse panel, this is a quintessential phase-two play. It also seems less forced than Weinstein trotting out Philomena Lee to “meet” the Pope last year, or positioning “Silver Linings Playbook” as a movie about mental health two years ago.

The campaign is based around a series of phrases that begin with the words ONE FILM: “One Film Breaks the Silence…One Film Moved Us With the Truth…One Film Forced Us to Question the Facts…One Film Inspired Us to Open Our Eyes” and, most central to the message, “One Film Is Making a Difference.”

The movie: “The Big Short”
The message: “No, we’re the important movie.”
When Paramount unveiled its endgame ad campaign for “The Big Short,” a company executive pointed out that the ads had been in the works for a long time — which is good, because there are substantial similarities between the “Spotlight” tag line “One Film Is Making a Difference” and the conclusion of the new “Big Short” TV ads: “Make a Difference. This Is the Year to Go Big.”

“The Big Short” campaign takes the same approach as the “Spotlight” campaign, and with a similar look and feel. While the Adam McKay film was initially sold for the highly entertaining way in which it made the financial crisis digestible and even humorous, it is now being pushed as the movie that stands up for the little guys who lost their homes and savings — and as the, shall we say, one film that fits a time of economic uncertainty.

But instead of “ONE FILM,” the key phrase here is “THIS IS THE YEAR TO GO BIG.” (Its new Sunset Strip billboard is at top.) “Join the conversation,” says one ad. “Big storytelling, big ambition, big performances, big risk, big education, big filmmaking, big outrage, big heart, big entertainment.” 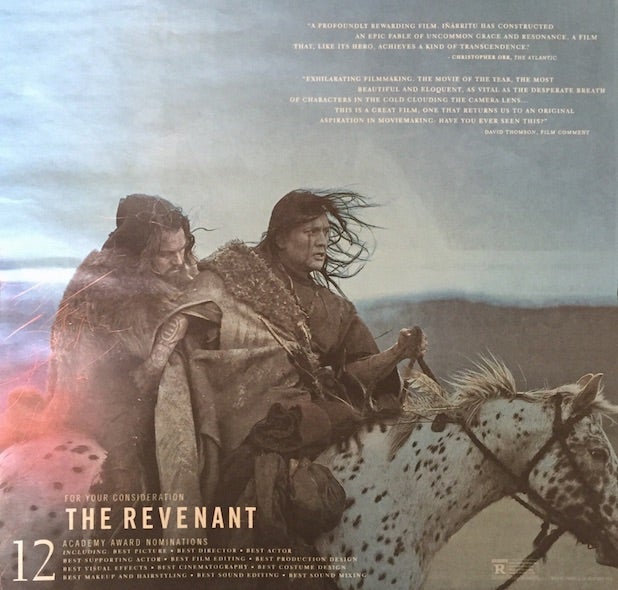 The movie: “The Revenant”
The message: “You can take us seriously, too.”
The initial campaign for “The Revenant” was all about how hard it was for director Alejandro G. Inarritu and his cast and crew to make the movie in tough conditions, and about Leonardo DiCaprio, and about that bear attack.

Fox hasn’t turned its back on those aspects of the film, and it hasn’t dramatically changed the look of its “for your consideration” advertisements. But recent ads have been classier, with atmospheric stills from the film, subdued typography and no blaring headlines.

In addition, the ads feature quotes not from usual blurb-masters like Peter Travers and Pete Hammond, but from Christopher Orr of The Atlantic and David Thomson of Film Comment — a highbrow pair whose inclusion fairly screams, “Take us seriously.”

And when the always-scholarly Film Comment put “The Revenant” on its cover, Fox quickly created a special booklet that reprinted the cover, cover story interview and essay, inserting the mini-mag into a Hollywood trade magazine.

The movie: “Mad Max: Fury Road”
The message: “Don’t talk to us about tough movies, Alejandro.”
The Best Picture chances for George Miller‘s critically-acclaimed action movie have faded in recent weeks, but Miller himself is still considered a potential upset victor in the Best Director race. The focus of the campaign has shifted increasingly to the well-liked veteran director, and to the audacity and degree of difficulty of his vision.

One recent trade contained a 44-page “Mad Max” photo booklet, which featured Miller first and foremost, and also included these stats on one of the first pages: “6 months in the desert, 350 salvaged cars, 150 hand-built vehicles, 150 stunt performers, 1,700 total crew, 400 hours of footage, 3,500 storyboards.”

In other words, what’s a few months in the cold and snow? “The Revenant” might have been hard to make, Warner Bros. is almost saying, but “Mad Max” was a beast, too — and it was a beast that was created and tamed by a 70-year-old man.