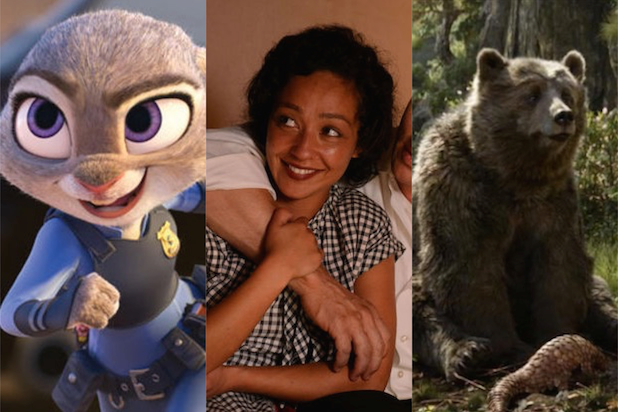 "Zootopia," "Loving" and "The Jungle Book"

Richard Linklater‘s “Everybody Wants Some!!” could be nominated for the Academy Award for Best Picture. Bill Murray may pick up an acting nomination for his voiceover performance in “The Jungle Book.” And Nicolas Winding Refn‘s “The Neon Demon” might earn a nomination for its costume design.

That’s could, may and might, mind you — because in the real world, none of those things is likely to happen.

If you look at the films that have been released during the first six months of 2016, you will find precious few that are apt to be competing for Oscars at the end of the year.

Also Read: Cannes Recap: Can Any of This Year's Movies Crash the Oscar Race?

While this decade has seen first-half Best Picture nominees like “Mad Max: Fury Road,” “The Grand Budapest Hotel,” “Midnight in Paris,” “The Tree of Life,” “Toy Story 3” and “Winter’s Bone,” the field is far thinner this year.

We’ve divided this survey into three sections: films released so far this year that are legitimate Best Picture contenders, films that may be in the running in other categories and, because otherwise the pickings would be slim indeed, possible contenders that haven’t yet been theatrically released but have been seen at film festivals.

BEST PICTURE
The vast majority of nominees in the Oscars’ marquee category are released in the fall. But since the Academy expanded the category in 2010, most years have found room for at least one film released in the first half of the year. This year, though, there’s precious little that has any chance of making the cut.

“Everybody Wants Some!!” drew almost unanimously positive reviews — but despite its quality, Linklater’s purposefully ramshackle comedy about the last weekend before college is probably far too low-key to register strongly with Oscar voters. (His last movie, “Boyhood,” was really his only film to catch the Academy’s eye, and that’s because of its scope and its novel 12-year production process.)

Beyond that, what is there? Virtually nothing, that’s what. Sure, we’ve seen good movies released since January — “Sing Street,” “Eye in the Sky,” “Born to Be Blue,” “The Jungle Book” — but nothing that figures to register with voters the way “Mad Max: Fury Road” did last year, or “The Grand Budapest Hotel” the year before, or “Midnight in Paris” and “The Tree of Life” in 2011.

Also Read: 'Everybody Wants Some!!' Review: Richard Linklater Scores With Another Nostalgic Rush

Like it or not, Oscar voters draw their contenders from the ranks of studio films (either major studios, indie divisions of the studios or known-quantity indie studios), and studios wait until the fall to release the movies they’re going to push for Oscars.

OTHER CATEGORIES
There’s far more to choose from if you expand the survey to films that will compete for nominations outside the Best Picture and acting races. The year’s top-grossing films to date, for instance, include five that could make the visual-effects shortlist: “Captain America: Civil War,” “Deadpool,” “Batman v Superman: Dawn of Justice,” “X-Men: Apocalypse” and the potential front-runner, “The Jungle Book.”

Another four will be in the thick of what should be an unusually brutal race for Best Animated Feature: Disney’s “Zootopia” and Pixar’s “Finding Dory” for sure, and potentially DreamWorks Animation/Fox’s well-received “Kung Fu Panda 3” and Sony’s “The Angry Birds Movie,” though that one is more of a long shot.

Also Read: 'Zootopia' Would Have Perfect Rotten Tomatoes Score Except for These 2 Critics

In other categories, it’s not inconceivable that “The Neon Demon,” “Alice Through the Looking Glass” and “Hail, Caesar!” could contend for costume and production design awards, or that songs from “Sing Street” and even “Popstar: Never Stop Never Stopping” could figure into the always-unpredictable Best Original Song race.

And in the Best Documentary Feature category, where it can help to come out early in the year — that way you avoid being lost in the deluge of screeners that voters in the Documentary Branch receive — we’ve already seen a strong contender in the political doc “Weiner,” and a complete wild card in ESPN’s five-part, seven-and-a-half-hour “O.J.: Made in America.”

That acclaimed doc was made for ESPN’s “30 for 30” series and had its TV premiere on June 11 — but prior to its TV airing, it had a quiet one-week run at theaters in Los Angeles and New York to qualify it for the Academy Awards. It’s one of the most celebrated nonfiction works of the year, and could well figure in the Oscar race if voters don’t view it as a TV film, not a theatrical doc — but that’s a very big if.

Also Read: How 'OJ: Made In America' Is Better Than Any Other OJ Simpson Retrospective (Photos)

FESTIVAL FILMS
Now we’re getting into films that might really figure into the awards race. In January, the Sundance Film Festival brought Nate Parker’s “The Birth of a Nation” and Kenneth Lonergan’s “Manchester by the Sea,” both of which drew raves, were snapped up by distributors and are awaiting awards-season releases from Fox Searchlight and Amazon/Roadside Attractions.

Four months later, the Cannes Film Festival introduced another batch of prime films, although none of them seemed to have any chance of duplicating the awards haul of last year’s Cannes hit “Mad Max.”

The Palme d’Or winner, Ken Loach‘s “I, Daniel Blake” is a resolutely small, understated character study whose best chance (a remote one at that) probably lies with lead actors Dave Johns and Hayley Squires, while Andrea Arnold‘s raucous road trip “American Honey” wowed many critics but may well be too long, too aimless and too besotted with messy excess to seduce many Oscar voters.

Jeff Nichols‘ “Loving,” on the other hand, is a movie that looks like Oscar bait on paper (a drama about an interracial couple in the South in the 1960s who went to court for the right to live together) but plays far more subtly than that. Lead actress Ruth Negga will certainly be in the conversation all awards season and may well end up on a few stages before she’s through, but the fate of the movie itself is less certain.

Jim Jarmusch‘s “Paterson,” and its star Adam Driver, deserve awards attention as well, though Jarmusch’s intimate character study is so quiet and subtle that it may well get lost in the shuffle. (But one can dream.)

As usual, though, Cannes will probably end up supplying at least half a dozen entries in the Oscar foreign-language race — and if Germany opts to submit Maren Ade’s touching and very funny “Toni Erdmann,” the biggest critical hit at Cannes, it’ll almost certainly have a shortlisted film, and probably a nominee, on its hands.

Other foreign-language films that may well end up contending for the Oscar include Brazil’s “Aquarius,” South Korea’s “The Handmaiden,” Spain’s “Julieta” (though the Spanish selection committee often bypasses the work of its director, Pedro Almodovar), the Philippines’ “Ma’ Rosa,” Iran’s “The Salesman” (from Asghar Farhadi, who directed the country’s only winner, “A Separation”), Belgium’s “The Unknown Girl,” Romania’s “Sieranevada” or “Graduation,” Chile’s “Neruda,” Israel’s “One Week and a Day” and director Paul Verhoeven‘s “Elle,” if a single country can make a legitimate claim for a movie in French by a Dutch director with French, German and Belgian financing.

But this may be the only category with any chance of being populated with many films we’ve already seen. In most of the major categories, the Oscar race has barely begun.

If you want to get a look at some real competitors, see you in September.