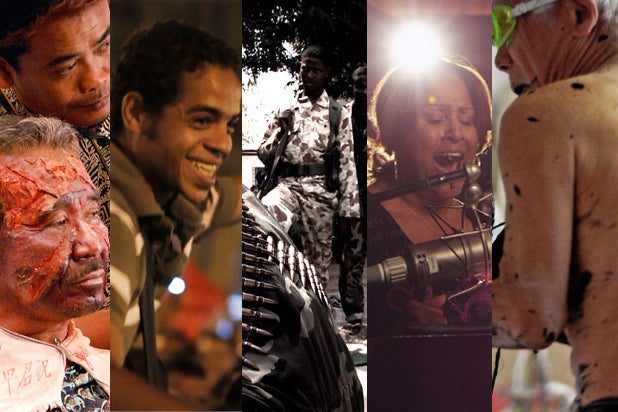 This year’s Oscar-nominated documentaries took filmmakers from rooftops in Indonesia to riots in Egypt to trouble spots where the U.S. is engaging in covert warfare, with stops along the way at recording studios in Los Angeles and art galleries in New York. They are the Academy’s choice to sum up a rich, varied year in nonfiction filmmaking. To borrow a phrase from Sarah Polley‘s “Stories We Tell,” 2013’s most-honored doc not to land an Oscar nomination, here are the stories they tell.

THE ACT OF KILLING

“The Act of Killing” is a chilling and often surreal chronicle of a group of gangsters who were contracted by the Indonesian government to carry out the mass killings of communists, leftists and labor unionist in the mid 1960s. Rewarded with power and prestige by the government, the gangsters boasted about their killings to director Joshua Oppenheimer, and then bizarrely began to re-enact them in the style of movies that they loved.

“I had been making a film with survivors, and they were too scared to talk about what had happened in any great detail, because living all around them were the killers. I said, ‘How are we gonna get this story told?’ And they said, ‘It’s very easy, Josh. All you have to do is film the killers.’

“I went to those people’s houses, pretending to be filming village life, and the first guy immediately invited me in and started telling stories about how he had drowned hundreds of members of the palm-oil plantation workers union in just a period of a few months. And he spontaneously started re-enacting it, showing how he did it, while his nine-year-old granddaughter sat in an overstuffed chair watching as if she’d heard this story many times.

“So I filmed with this guy. He took me to the river where he killed people, I asked him to introduce me to other members of the death squads. I felt that I was getting something of world historical importance, that there was a genocide that hadn’t really been documented with any rigor. But also there was this discovery of a regime of impunity so complete that I was getting something that was intended for an audience. The killers were boasting, but for whom?”

The biggest commercial success among this year’s documentary nominees, “20 Feet From Stardom” chronicles a group of the greatest background singers in pop music history through stories that are often as heartbreaking as the music is invigorating. One of the film’s highlights is an extended sequence in which singer Merry Clayton listens to the original, scorching vocal track she recorded for the Rolling Stones classic “Gimme Shelter” after being summoned to the studio late one night in curlers. Director Morgan Neville also got Mick Jagger to listen to the recording.

“I actually found the iso [isolated] vocal track for ‘Gimme Shelter’ online. Somebody had bootlegged it, and the second I heard it, it just blew my mind.I just thought, Oh my god, I’ve got to play this for Merry. So when I did the interview, I brought a stereo and I set up speakers and played it for her, and it blew her mind, too. She had never heard the iso vocal before. And when I interviewed Mick about it and played him the song, Mick’s story was perfectly in sync with Merry’s. They both remembered the same things–they didn’t know they were making history.

“And I had two thoughts afterwards. The first was, That was absolutely incredible. And the second was, Oh my God, now I have to clear [the rights to] ‘Gimme Shelter.’

“Music clearance isn’t the sexiest of subjects, but it took an incredible amount of work. I worked hard on it and Cate [Caitrin Rogers], my other producer, worked on it, but [the late music-industry executive] Gil [Friesen]–this was his specialty. He was the king of the lunches. He always took people to lunch, because he said, ‘It’s harder for them to say no to my face.'”

Richard Rowley and Jeremy Scahill were longtime war reporters when they got together to document the growing covert warfare–drone strikes, targeted assassinations, off- the-books military operations–that dominated the war on terror. “Dirty Wars” is directed by Rowley and features Scahill as the face of the investigation into a troubling style of warfare. It was made possible, Rowley said, when the journalists struck out on their own after being embedded with the U.S. military.

“When you’re embedded, everything is made easy. You’re picked up by military escorts and taken in armored vehicles, and you’re housed and protected and fed for free by the military. And you’re fed with story ideas and video clips and photos and selected soundbites. If you have to fill a certain number of minutes of airtime or column inches of print every day, you can stay embedded for as long as you can handle it and work for almost nothing.

“But to disembed yourself means calling your boss and saying, ‘Look, I’m not going to be filing a story every day anymore. And I’m going to be spending a lot of money because Iraqis and Afghans are going to be risking their lives to work with me, and I have to pay for that. I’m going to be risking my life, you’re going to be implicated in the risks I take, and at the end of three weeks I’ll come up with a story, and maybe it’ll get more clicks than the story I did about American troops eating their Thanksgiving dinners.

“It was incredibly harrowing, and Jeremy and I were constantly thinking, Is the story worth the risks that we’re taking? Do people really care about this back home? But there were so many people who risked their lives to help us, because they believed in the power of their stories and they believed in Americans. So we refused to be more cynical than the people who risked their lives to work with us.”

CUTIE AND THE BOXER

Japanese artists Noriko and Ushio Shinohara are the titular subjects of “Cutie and the Boxer”–but the film is focused less on the art they make than on the relationship between them. With a verité approach and access to the couple for five years, director Zachary Heinzerling said he found the tension and rivalry in their relationship, with its 22-year age difference, emerging in the most casual of circumstances.

“At first they wanted to know what the movie was about. They asked me, ‘Why are you coming over? What are we going to be filming today?’ And I would have an answer. But eventually I was coming over so often that they stopped asking that question, and realized that maybe they weren’t going to figure out the film. It clued them in that it was as important to me to shoot them cooking as to shoot them painting or answering questions.

“There was a key scene where Steven Spielberg came up in their conversation. Ushio was talking about Spielberg’s first film being his best, and Noriko said, ‘Well, that could be the same with artists.’ Basically saying that Ushio’s best work was behind him, too. I would never get her to admit that kind of resentment if I was asking her questions, but it came out in the conversation, with its undercurrents of spite and anger.

“In my experience with documentaries, something to that extent is rare to see. And the fact that I could be filming them so closely in an environment that was so nicely lit, and still get those kind of scenes, clued me in that these were the sort of conversations I wanted the whole film to rest on.”

A street-level chronicle of the grassroots Egyptian revolution that toppled both Hosni Mubarak and the military rule that replaced his government, “The Square” landed an Oscar nomination almost exactly a year after it won the audience award at last year’s Sundance Film Festival. At Sundance, though, director Jehane Noujaim and producer Karim Amer knew that their story was ongoing–so after the fest they went back to Tahrir Square to film the protests that over the summer pushed Mohamed Morsi out of office. (By the way, Noujaim and Amer just got engaged.)

NOUJAIM: “What Sundance gave us, which was a vote of the people, was a huge boost to the entire team that this was a story which was relevant and connecting to people outside of Egypt. But when Morsi was using the tools of democracy to establish another dictatorship, and all of the people we were following were back in the streets, we knew we had to keep shooting.”

AMER: “People have gone through this awakening to remove a dictator, lived through a military council for a year and a half, seen the constitutional process compromised, elected a president, found him also compromised, and removed that president. So now people have reached a point where they realize that the political process alone is not going to be the end- all, be-all definition of this revolution. It is going to be a continuous fight to exercise the rights that people want.”

NOUJAIM: “It’s not over, but I’m very satisfied with where we ended the film, because I feel it covered the journey of people as they fought against fascism, regardless of the face of that fascism–whether it was Mubarak or the military or the Muslim Brotherhood. The revolution continues, and the fight continues, but we have a film that shows one full cycle of that fight, with the end message being, no matter what happens, we will continue to hold government accountable.”