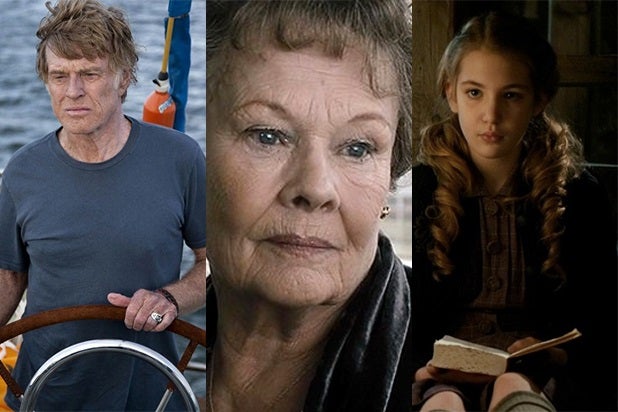 You don’t have to be a blockbuster like “Gravity,” but box office can be a factor when it comes to Oscar and awards consideration, and several high-profile movies are at the make-or-break point.

Most of the films in the awards discussion have done steady but unspectacular business in limited release so far, in sharp contrast to last year, when six of nine Best Picture Oscar nominees made more than $100 million at the box office. The Coen brothers’ “Inside Llewyn Davis” opens Friday, and there are several heavyweight contenders still to come, so the landscape will surely shift over the next few weeks.

There’s no direct correlation between box office and awards success. Oscar Best Picture winners, for example, have been all over the map in terms of box office, with blockbusters like “Titanic” ($2.1 billion worldwide) and films that did just so-so business like 2008’s “The Hurt Locker” ($17 million domestic) taking the prize.

Also read: Why Oscar May Never Give Us 10 Best Picture Nominees Again

But for the studios behind the awards contenders, grosses aren’t the only consideration. A key at this point is persuading voters to either see their movie or pick up the awards screener, and box office success can help with that. That’s particularly true as it gets later in the season and voting deadlines approach.

With more than $600 million at the worldwide box office, Warner Bros.’ Sandra Bullock-George Clooney space epic “Gravity’ is a bona fide blockbuster. That’s about where “The Life of Pi” wound up last year, but the bulk of its grosses – nearly 80 percent – came from overseas. About 60 percent of the global haul for Alfonso Cuaron’s 3D thriller has come from abroad.

Sony’s modern-day piracy saga “Captain Phillips,” starring Tom Hanks, is up to $102 million domestically and is bearing down on $200 million globally. That success, along with Hanks’ high profile, should keep it in awards voters’ minds.

Fox Searchlight’s “12 Years a Slave,” considered a Best Picture front-runner, last weekend became 2013’s highest-grossing English-language platform release with $33 million since rolling out in October. That puts it just ahead of “Blue Jasmine,” the Woody Allen drama featuring a Best Actress favorite, Cate Blanchett, which has taken in $32 million since opening in July.

“12 Years” has played better than even Fox Searchlight expected, according to distribution chief Frank Rodriguez.

“We thought we’d be losing theaters at this point, and maybe drop to a couple hundred around Christmas and then come back after the nominations,” he said. “But we wound up staying on 1,165 over the holiday and did $3 million, and this week we’ll be in 1,077, so we’ll see where it goes. We were very excited to see (director) Steve McQueen win the New York Film Critics award.”

Studio marketers will look to make hay with the many honors or nominations their films garner in the next few weeks, and strong showings at the Jan. 10 Oscar nominations will bring re-releases or expansions for those named.

Two films that opened much earlier this year – Roadside Attractions’ “Mud” and the Weinstein Company’s “Lee Daniels’ The Butler” – have already made their marks at the box office, but could be back if the nominations come.

“The Butler,” a Best Picture hopeful that features acting contenders Forest Whitaker and Oprah Winfrey, won the box office crown for three weeks in a row in August and has brought in more than $115 million since.

The indie hit “Mud,” which stars Matthew McConaughey, broke out in April and has taken in $21.5 million, making it Roadside’s top-grossing film ever.

All of those films are home free in terms of achieving enough box office success to ensure they won’t be overlooked by awards voters. A number of other contenders are getting close, while the jury remains out on some others.

The AIDS drama “Dallas Buyers Club,” which stars McConaughey and Jared Leto, is almost there. It’s taken in more than $10 million in five weeks, and cracked the top ten at one point. Last weekend, when Focus Features added 30 theaters to bring it to 696 overall, was the first in which it fell off from the previous week but it’s still averaging a solid $3,617 per theater.

“Nebraska,” director Alexander Payne’s drama starring Bruce Dern as a cantankerous father who thinks he’s struck it rich, has built momentum since opening three weeks ago. It’s been in 24 and 102 theaters the past two weekends after opening in four, and its per-screen average over Thanksgiving was a strong $7,166. Paramount Vantage plans to expand “Nebraska” into roughly 250 theaters on Dec. 13 and approximately 300 the following week.

“The Book Thief” broke into the top ten at No. 6 over Thanksgiving, after Fox expanded it from 70 to 1,234 theaters last weekend and it brought in a solid $4.8 million. It’s based on a best-selling novel by Markus Zusack, and this week will help determine whether it can connect with moviegoers who aren’t familiar with the tale of a young girl (12-year-old Sophie Nelisse) growing up in Nazi Germany with a family sheltering a Jewish refugee.

Another film looking to make gains this week is the Weinstein Company’s “Philomena,” which stars Best Actress contender Judi Dench. TWC aggressively expanded it from four to 835 theaters over the holiday and it took in $4.6 million and was ninth overall. Its per-screen average was an OK $5,508, but TWC’s exit polling was very strong and its audiences have skewed older, so there’s good reason to think it can build over the next few weeks. It will stay in 835 theaters this week.

TWC also debuted “Mandela: Long Walk to Freedom,” starring Idris Elba as the iconic statesman, on four theaters last weekend. It averaged $25,077 per screen, the best of any film in the marketplace, but this weekend will be a better test.

“All is Lost,” the stranded-at-sea saga starring Robert Redford, could definitely have used a stronger box office than the $5.2 million it’s taken in since Oct. 18. It will have to rely on critics awards to make it a screener that voters want to pick up, but Tuesday’s N.Y. Film Critics Best Actor award for Redford could be a huge help.

Among the movies with awards buzz that have yet to be released are Sony’s David O. Russell corruption saga “American Hustle” and Disney’s making-of-“Mary Poppins” tale “Saving Mr. Banks,” both of which are set for limited debuts on Dec. 13. They’ll both go nationwide the following week, as will CBS Films’ “Inside Llewyn Davis.”

On Christmas Day, Fox will roll out the Ben Stiller comedy “The Secret Life of Walter Mitty” and Paramount will debut Martin Scorsese’s “The Wolf of Wall Street” with Leonardo DiCaprio starring. On that same day, TWC will open “August: Osage County” on four screens and go nationwide with “Mandela: Long Walk to Freedom.”