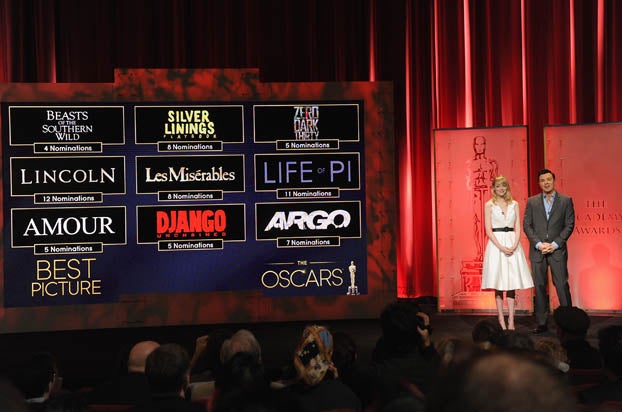 This article first appeared in OscarWrap: The Race Begins

“I really hope we have 10 nominees this year” is a phrase I’ve been hearing a lot lately in conversations about the Oscar race. The underlying assumption is clear: With the Academy’s system of variable nominations, in which we could have as few as five nominees for Best Picture or as many as 10, more good movies equals more nominees.

Certainly, this is a good, maybe even a great year for movies. “Gravity” is a visionary delight. “12 Years a Slave” packs a staggering punch. “Captain Phillips” and “Rush” are thrilling fact-based dramas. “Inside Llewyn Davis” is the Coen brothers with a lovely song in their black little hearts. “Nebraska” is smart and funny and affectionate.

And more: “Saving Mr. Banks” is grandly entertaining and moving. “All Is Lost” is an unlikely tour de force for both Robert Redford and J.C. Chandor. “Prisoners” pulls off the unlikely trick of being simultaneously slow and gripping. “Dallas Buyers Club” makes you root for the unlikeliest hero. “Enough Said,” “Blue Jasmine,” “Fruitvale Station,” “Short Term 12” and “Before Midnight” are little movies that pay big emotional dividends.

And Spike Jonze‘s “Her” is a wholly original and deeply affecting love story.

That’s 16 movies right there, and I haven’t even mentioned “American Hustle,” “The Wolf of Wall Street,” “Lee Daniels’ The Butler,” “The Secret Life of Walter Mitty,” “The Book Thief,” “Mandela: Long Walk to Freedom,” “Philomena” or “Lone Survivor,” or the year’s best documentaries, foreign films and animated features.

So if Academy voters choose wisely and come up with a full slate of 10 nominees, I’ll be delighted. But I’ll also be surprised — because the way the system works, more good movies does not equal more nominations.

A quick refresher course on the system: Voters rank their top five favorites in order of preference. Any movie that’s listed at No. 1 on more than 8.9 percent of  the ballots is an automatic nominee.

A complicated wrinkle called “the surplus rule” then kicks in, apportioning partial votes from ballots whose first choices have received significantly more votes than they need.

Finally, first choices with less than 1 percent of the vote have their votes shifted to the second (or third, fourth or fifth) choice on each of those ballots.

At that point, any movie with more than 5 percent of the vote (300 votes, give or take) is a nominee. Any movie with less is not.

Also read: How the Major Studios Reclaimed Their Place in the Oscar Race

Under that system, with its single round of redistribution limiting the chances for films that don’t get 300 first-place votes right away, more good movies don’t lead to more nominations unless the votes are very evenly divided. An overabundance of quality could just as easily push borderline films out as get them in.

In fact, there’s simply no precedent for a full slate of 10 nominees. Sure, the 2009 and 2010 Oscar years each produced that many — but those were years when 10 nominees were automatic, before the variable system was instituted.

To help the Academy decide whether to adopt the system, PricewaterhouseCoopers accountants went back over eight previous years of Oscar voting, 2001-2008, and counted the ballots all over again using the new system. According to PwC and AMPAS, the recount would have resulted in years of five, six, seven, eight and nine nominees–but never a year of 10. And in the last two years, after the system was in place, there were nine nominees both years.

In other words: Not once, in the 10 years that have been studied, has the Oscar system produced a full slate of nominees. So while 10 is theoretically possible, it has never actually happened.

And we’re talking about some pretty good years. In 2007, for instance, in addition to the nominees “No Country for Old Men,” “Atonement,” “Juno,” “Michael Clayton” and “There Will Be Blood,” voters could have added “Zodiac,” “The Diving Bell and the Butterfly,” “The Assassination of Jesse James by the Coward Robert Ford,” “Eastern Promises,” “The Visitor,” “The Kite Runner,” “Once” and “I’m Not There.”

So yes, 2013 is a good year. A varied year. A year in which the major studios have made a strong stand.

An unpredictable year in which the big winner could be harrowing, or exhilarating, or beguiling, or maybe even surprising.

Just don’t expect it to be a year of 10, because the Academy really doesn’t do that.