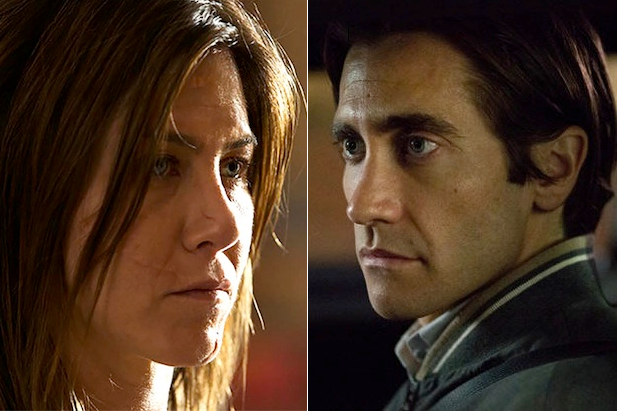 What a difference four months, and some good campaigning, makes.

When “Nightcrawler” and “Cake” premiered at the Toronto Film Festival back in September, the former movie seemed too dark and creepy and the latter too small to figure in the Oscar race. But as PricewaterhouseCoopers reps prepare to unveil this year’s nominations to the Academy staff on Wednesday night and to the entire world on Thursday morning, both of those films have found themselves in the thick of the race, as two of the unlikeliest potential success stories of this year.

Although I thought they were both near-prohibitive longshots only a few months ago, Jake Gyllenhaal of “Nightcrawler” and Jennifer Aniston of “Cake” have both made my list of predicted nominees, and I expect to see the former film in several other categories as well.

It’s a strange year, with an unusual best-picture frontrunner (“Boyhood”) that has rarely appeared to be comfortable as a frontrunner. Some races seem relatively clear (Patricia Arquette and J.K. Simmons will likely win supporting Oscars, while Best Actor will probably come down to Eddie Redmayne v. Michael Keaton), but others are wide open and confusing.

With that in mind, here are my best guesses as to what we’ll hear on Thursday morning in 11 of the key Oscar categories. (My predictions in most other categories can be found at GoldDerby.com.)

BEST PICTURE
Since mid November, the clear top five has been “Boyhood,” “Birdman,” “The Imitation Game,” “The Theory of Everything” and “Selma” – though the rise of “The Grand Budapest Hotel” as the film most nominated by the guilds, and the failure of the late-breaking “Selma” to honored by most of them, has changed the picture somewhat.

Since the Oscars expanded the best-picture slate in 2009, only “The Tree of Life,” “Extremely Loud & Incredibly Close” and “Amour” have made the cut without a single nomination from the four major guilds (the DGA, PGA, WGA and SAG). But I expect “Selma,” which sent screeners to the Academy but not the guilds, to become the fourth film to do so, in the process finding a measure of redemption at the hands of Oscar voters.

After that, it depends on how many nominees are produced by the Academy’s process, which could lead to as many as 10 nominees or as few as five. Since the last three years have all had nine nominees, that’s the sensible choice again this year. But who gets the last three slots?

I thought Clint Eastwood’s “American Sniper” was on the bubble until the Directors Guild nominated him on Tuesday morning, but that recognition is awfully persuasive. (Only one film in the last five years, “The Girl With the Dragon Tattoo,” failed to get a best-picture nomination after getting a DGA one.)

For the final two spots, I expect the preferential voting system, which rewards films with a small, passionate following over milder consensus favorites, to help “Whiplash” more than “Gone Girl” and “Unbroken.” And while “Foxcatcher” has a real shot at a nomination, I think the passion vote will provide an unexpected surge for “Nightcrawler” – which may be too dark and too creepy for the mainstream Academy, but might also be too good to ignore.

Predictions (in order of likelihood):
“Boyhood”
“The Imitation Game”
“Birdman”
“The Theory of Everything”
“Selma”
“The Grand Budapest Hotel”
“Whiplash”
“American Sniper”
“Nightcrawler”

BEST DIRECTOR
Conventional wisdom would say that the directors of my top five would have the inside track, which would mean Richard Linklater, Morten Tyldum, Alejandro Inarritu, James Marsh and Ava DuVernay. But Tyldum and Marsh are relatively unknown and could easily be replaced by more experienced directors, while DuVernay may have been hurt by the controversy over “Selma.”

The DGA went for Linklater, Inarritu, Tyldum, Wes Anderson and Clint Eastwood, but they usually agree with the Academy on only four of the five. Maybe DuVernay takes that fifth spot from Eastwood, buoyed by the way her movie speaks to what’s happening today, or maybe David Fincher for “Gone Girl” or Damien Chazelle for “Whiplash” get in instead.

BEST ACTOR
One of the most impressive feats of awards season was the way Jake Gyllenhaal muscled his way into a category that seemed to be locked in with Michael Keaton, Eddie Redmayne, David Oyelowo, Benedict Cumberbatch and Steve Carell. His feral videographer in “Nightcrawler” is so undeniable that he’ll probably supplant one of those five, most likely Carell for “Foxcatcher.” (Though Cumberbatch could prove not to be a lock, too.)

If there’s an additional surprise here, look for Bradley Cooper for “American Sniper.”

BEST ACTRESS
Another impressive awards-season feat: How Jennifer Aniston came from nowhere in “Cake,” a tiny film that wasn’t widely acclaimed, to make herself a real contender in what is admittedly a thin Best Actress field. Her biggest rival for a nomination is probably Golden Globe winner Amy Adams in “Big Eyes,” and I suspect this is a very close race between five-time nominee Adams and Oscar newcomer Aniston.

If enough Oscar voters saw “Two Days, One Night,” Marion Cotillard could (and should) have been a contender, but not enough did.

BEST SUPPORTING ACTOR
Here’s another thin category. If one of the top five falls out – maybe Duvall, in a movie that nobody was very enthusiastic about – the biggest contenders to take his place are Tom Wilkinson from “Selma” and Miyavi from “Unbroken.” But the former was probably hurt by the controversy over the depiction of his character, President Lyndon Johnson, and the latter never quite seemed to register with voters. If there’s a surprise, it could be Josh Brolin for his hilarious role in “Inherent Vice.”

BEST SUPPORTING ACTRESS
Another “Nightcrawler” surprise could be lurking here, with Rene Russo in a good position to swipe a nomination out from under perennial contender Chastain, or maybe even Stone, Knightley or the eternal Oscar favorite Streep.

BEST ORIGINAL SCREENPLAY
The Academy’s Writers Branch has a habit of recognizing smaller movies that don’t get much recognition elsewhere, but this year the smaller movies are among the favorites. “Selma” has a real shot of being recognized.

BEST ADAPTED SCREENPLAY
“American Sniper” is the strongest contender to supplant one of these five, though it’s not inconceivable that the stoners and Thomas Pynchon fans in the Academy could get Paul Thomas Anderson’s “Inherent Vice” into the mix. “Unbroken” is a longshot in another top-heavy field.

“The Imitation Game”
“The Theory of Everything”
“Whiplash”
“Gone Girl”
“Wild”

BEST ANIMATED FEATURE
Academy voters have a history of nominating one smaller film into this category, which would bode well for the hand-drawn Irish film “Song of the Sea” or the Japanese entry “The Tale of the Princess Kaguya.” But “The Book of Life” is a formidable contender as well – and remember, these voters have made a number of off-the-wall choices in previous years.

BEST FOREIGN-LANGUAGE FILM
The nine-film shortlist seems to have a clear top five: “Ida,” “Leviathan,” “Wild Tales,” “Timbuktu” and “Force Majeure,” and I’d be surprised if most of them don’t make it. But the committees that vote on the shortlist have a habit of including at least one unexpected choice, and the touching “Tangerines” or the austere “Corn Island” could be this year’s wild cards. If one of them gets in, “Force Majeure” could be the likeliest of the Big Five to be pushed out.

BEST DOCUMENTARY FEATURE
Laura Poitras’ “Citizenfour” is the prohibitive favorite and Steve James’ “Life Itself” seems all-but-certain to get the twice-snubbed James his first nomination. Beyond that, though, most of the 13 other films on the shortlist have a chance of making the final five, with “Virunga,” “Last Days in Vietnam,” “Keep On Keepin’ On,” “The Case Against 8,” “Finding Vivian Maier,” “Tales of the Grim Sleeper,” “The Internet’s Own Boy” and “The Salt of the Earth” all strong candidates.