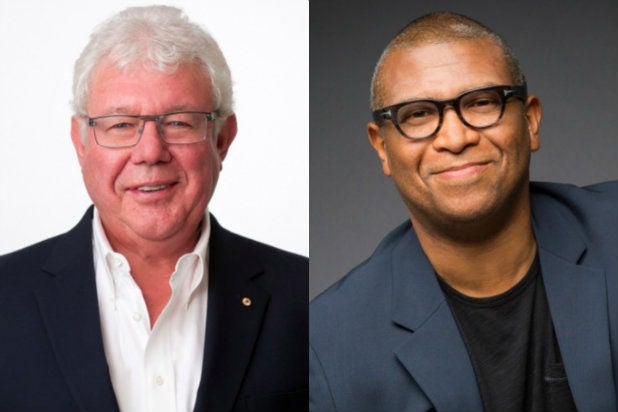 While Hudlin was occupied on set Tuesday, TheWrap caught up with Hill, who nabbed his Emmy as a producer on the 2011 World Series broadcast.

Hill, the former Chairman of Fox Sports Media Group and current president of his own the live ceremony on February 28.

What’s the interview process for a job like producing the Academy Awards?
Well, I had a conversation with Jim Gianopulos, the legendary chairman at 20th Century Fox. He asked, “Would you ever think about doing the Oscars?” And I thought, “I’d give my right arm to do the Oscars.”

So I get a call to go and visit with Cherly Boone Isaacs and Dawn Hudson at 4:30 p.m. on a Friday, at the Academy on Wilshire. I know as well as anyone that the kiss-off interview happens at 4:30 on a Friday.

“Kissy-kissy, love your work, must do lunch.” And then they tell you they’ve got to run and pick up the kids and traffic will be murder. But we were there talking for a long time.

You have this track record in live TV, and then Reginald Hudlin is obviously entrenched in the film world. Was that the combination they were going after?
I know my way around television, but my knowledge on film you could probably write on the back of the stamp. I love movies but I’m not a movie buff. I’d never get into the UCLA Film School. So they told me I would meet with this guy Reggie, a real film guy. We discovered in about 10 minutes we had the same sense of humor — absurdist wordplay, puns, and that Reggie had gone to Harvard film school and grew up with the Harvard Lampoon sense of humor.

You won an Emmy for producing the World Series. What sensibilities from producing live sports could the Oscar benefit from?
It’s not so  much what you see on the screen — they key thing is the performance, and the host. That’s what you have to achieve in a live show. I can create a feeling, a safety net for the presenters. They know I’m not going to leave them hanging. It’s not so much the technical, it’s knowing what can go wrong, what will go wrong — and if something does go wrong, no one would ever notice. Your mind has to be running 90 seconds, two minutes ahead.

If the host is most important, who do you have in mind?
It’s a remarkably good and prescient question. It’s something we have talked a lot about and will — but don’t forget a lot of the telecast is made by the 10 best movies of the year. We won’t know until between September and December when a lot of the contenders come out. It’s all got to move together.