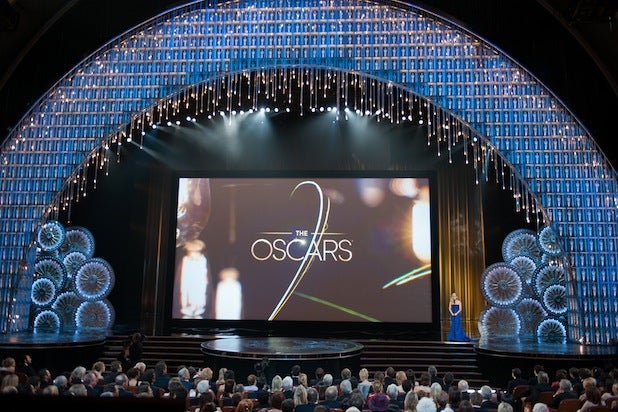 The 86th Oscars will celebrate “big-screen real-life heroes, super heroes, popular heroes and animated heroes,” according to an Academy press release. To coincide with the theme, the Academy will host a poster exhibit in the lobby of its Beverly Hills headquarters devoted to still photos and posters from films that include “Gandhi,” “Silkwood,” “Superman,” “The Dark Knight,” “Shrek,” “The Incredibles,” “Gladiator,” “The Grapes of Wrath” and “To Kill a Mockingbird,” the film that showcased Atticus Finch, the character named by the American Film Institute as the greatest screen hero of all time.

When they produced the Oscars last year, Zadan and Meron became the first producers in years to set a theme for the broadcast. The 2013 theme was the music of the movies, which included a lengthy medley of songs from the last decade of movie musicals and a James Bond tribute that featured Shirley Bassey singing “Goldfinger.”

This year’s theme will obviously fit with many of the year’s most high-profile movies, which sport such heroes as Solomon Northup (“12 Years a Slave”), Richard Phillips (“Captain Phillips”) and Ron Woodruff (“Dallas Buyers Club”).

And it will also enable the producers to bring in characters from the comic book and superhero movies that are typically ignored by Academy voters except in the visual effects category, but whose films are often among the top-grossers of the year.

No word, though, on whether the March 2 show will embrace some of the year’s most delicious anti-heroes from films like “The Wolf of Wall Street” and “American Hustle.”

“We wanted to unify the show with an entertaining and emotional theme,” said Zadan and Meron in the press release announcing the theme. “People around the world go to the movies to be inspired by the characters they see on the screen. By celebrating the gamut of heroes who have enriched our movie-going experience, we hope to create an evening of fun and joy.

“And that includes the filmmakers and actors who take risks and stimulate us with provocative subjects and daring characters. They are all heroes in the cinematic landscape.”

The producers added that “there will be no shortage of comedy” with host Ellen DeGeneres.

The exhibition titled “The Oscars Celebrates Movie Heroes” will be on display in the Grand Lobby Gallery of Academy headquarters from this Friday through March 5.