It’s clear what the Academy wants from those five extra best-picture slots they recently introduced.  They want big movies alongside little indies, “The Dark Knight” next to “The Reader” – or, say, “Up” and “Inglourious Basterds” competing with “An Education” and “The Road.”

(Apologies to those last two films if they end up being big hits, thereby ruining my analogy.) 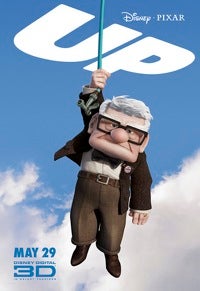 The question a few Oscar insiders have been asking lately, though, is this: What’s it going to take for the plan to achieve what the Academy wants it to achieve? Will the average voter behave differently when filling ten spots instead of five, or will he (or she) continue voting with the same mindset that has led to almost two decades of little movies competing for the big prize?

For years, we’ve seen the best picture race heavy with small, artsy films released by the studios’ specialty divisions. There’s a very good reason for this – after all, those films are for the most part considerably better than the big commercial movies released by the parent companies.

But it’s not like the major studios have suddenly gotten into the Oscar Movie business to capitalize on the new rule. So some Oscar watchers have suggested that it may well take a conscious effort for voters to use those extra five slots to expand their reach into a more varied and commercial realm. And if they don’t, we may well end up with five more of the same kind of nominations that led to this move in the first place.

So will they? Only the voters know … and they might not even really know what’ll happen once they’re faced with that new ballot with ten blank lines.

When I asked Academy members from a variety of branches if the expanded slate would change the way they approached voting, one constant emerged: the voters all insisted that the new rule would not change their criteria for picking nominees.

“I will vote for what films I think are the best.”

“I certainly intend to vote for my ten favorite films, period.”

“It won’t change how I vote, which is for the films I think are best.”

“I would not mix it up just for the sake of mixing it up.”

And yet … One new voter said he can’t imagine that being able to vote for ten nominees “will not naturally create tremendous diversity” in the films he chooses. Another member, who’s been voting for several years, took pains to point out, “for me, even when it was five, that sometimes included comedy or action depending on how well it was done.”

In other words, it’s not going to change my criteria, but that doesn’t mean I won’t vote for a comedy, or a doc, or a blockbuster …

It strikes me that this may be the best the Academy can hope for – that voters, still trying to vote the movies they like best in a year that’s short on releases but long on best-picture slots, will have no choice but to pick a more varied slate.