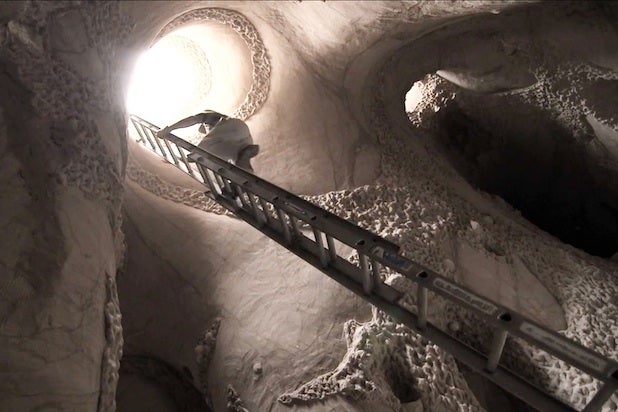 The Oscars’ Best Documentary Short category often presents a smorgasbord of social, political and societal ills, and this year’s entries delve into familiar subjects like war, violence, bigotry and death.

But most of the five nominated films also find measures of redemption and renewal in the darkest of circumstances; they’re about forgiving the man who almost beat you to death, about using music to survive in one of the ugliest environments man has ever created, about a murderer finding solace behind bars.

Typically, the winning short doc is the one that tempers its hard-hitting look at social injustices and lets the viewer feel hope.  But with this year’s crop, it’s not nearly so cut-and-dried; the race could go in a number of different directions, because a degree of hope courses through most of these films.

Academy members have received screeners of all five nominees, whose combined running time is about two hours and 45 minutes. They can also see them on Friday afternoon at the Academy’s Linwood Dunn Theater – or at theaters around the country beginning Friday, when Magnolia Pictures and ShortsHD opens a program of doc shorts to go with its previous programs devoted to the animated and live-action short nominees.

This is the last entry in TheWrap’s three-part guide to all the short-film nominees.

The most visually striking and beautifully shot of the nominees, “CaveDigger”  follows Ra Paulette, an idiosyncratic artist who carves spectacular caves out of the sandstone hills of New Mexico. He’s obsessed, driven, maybe a little deluded and quite possibly more than a little nuts, but he turns hillsides into works of art, and Karoff’s cameras capture every gorgeous nook and cranny – and also every cave-in as years of work disintegrate overnight.

Paulette is an infuriating but fascinating character, a man who inevitably alienates his patrons and ignores things like making a living in his quest to turn cave-carving into “a transformative tool.” He keeps dragging the film into a meditative, philosophical space, though Karoff is savvy enough to make clear the tragic implications of just how unconcerned Paulette is with ordinary life.

In the past, there have been times when a lineup of dark, issue-oriented films lost to the most striking and least depressing nominee, and this film could be that. But the year’s other entries have enough uplift in them that  they’re unlikely to prove too dark for voters. “CaveDigger” would have to triumph on the strength of its quirky character study and beautiful visuals; that’s conceivable, but it might be a tall order.

A story of unfathomable forgiveness to rival anything in “Philomena,” “Facing Fear” chronicles two men: Matthew Boger, a gay man who was thrown out of his home by his religious mother at the age of 13, and wound up selling his body on the streets of Hollywood, and Tim Zaal, a San Gabriel Valley outsider who thought he’d found his community in the skinhead neo-Nazis who went to punk clubs and then prowled the same streets looking for people to assault.

More than two decades after Zaal and his gang savagely beat and nearly killed Boger, the two men met by chance at the Museum of Tolerance in Los Angeles. The film is structured largely around the two telling their stories; it details an unlikely reconciliation and even friendship.

The narrative is powerful and disquieting, but its impact is unavoidably lessened by the fact that the story emerges largely through talking heads, with some shadowy reenactments and a few current-day scenes of Boger and Zaal together. You hear the two talk about the process of forgiveness, but you never really see it, which is why a film that has the potential to be devastating seems to fall a little short. But the message is a powerful one that could sway more than a few voters.

“Karama Has No Walls”
Sara Ishaq

In many ways a companion piece to the nominated documentary feature “The Square,” “Karama Has No Walls” is a street-level chronicle of an uprising in Yemen that was inspired by the Egyptian revolution chronicled in the feature.  But this sit-in protest ends not in a government collapse, but in a brutal attack on the protestors by what appears to be a combination of security forces and hired thugs.

The film gets more graphic and unsettling as it progresses, and also smaller in scale; what starts as the story of a mass of people taking to the streets turns into the harrowing tale of one bloody day, one 11-year-old boy who is blinded by gunfire, and a teenager who is shot and killed.

The tight focus makes the film affecting, but also excruciating and hard to watch at times. End titles try to provide a larger perspective – but for every voter who finds “Karama” tough, immediate and wrenching, another may find it overshadowed by the scope and range of “The Square.”

“The Lady in Number 6: Music Saved My Life”
Malcolm Clarke and Nicholas Reed

On paper, “The Lady in Number 6” seems to be a smart choice for the win. It’s about World War II and the Holocaust, but it also has an uplifting message about the healing power of art. Its subject,  Alice Herz Sommer, is an indomitable 109-year-old who still plays piano every day, and speaks without rancor of how music got her through the darkest days in the Theresienstadt concentration camp.

While Sommer can be disturbingly cheery about what she endured during the war – the most telling anecdotes come from others, not from her – she is a compelling character, and one whose message of survival through art is one that has often resonated with voters in the category.

But if the film looks like a winner on paper, one thing could put a wrinkle in that conclusion.  Director Malcolm Clarke also narrates “The Lady in Number 6,” and his relentless voiceover is so old-fashioned and at times portentous that it gives the movie the feel of a second-rate television documentary. With a more nuanced and sophisticated approach to narration (or with the use of title cards in its place), the film could indeed have been a slam-dunk winner – but as it stands now, its victory will require voters to overlook a glaring shortcoming that in some ways makes it the least accomplished of the nominees.

The longest of the nominees is only seconds under the Academy’s 40-minute limit, and it was the only short with an HBO connection at the time of its nomination. “Prison Terminal” is an even-handed chronicle of a hospice-care unit set up in an Iowa penitentiary to help terminally ill prisoners in their final days.

The central figure is Jack Hall, who is serving a life sentence for murdering the drug dealer he blames for introducing his son to drugs and leading to the teen’s suicide. Hall is unrepentant, and haunted by his experiences in World War II and his time in a German prison camp; he is also a little distant and essentially unknowable. In fact, viewers are less likely to latch onto Hall than they are to a couple of the inmates who care for him as he’s dying. A key line comes when one of them says that the hospice work takes him to a place where “for once, I’m somebody that nobody thought I could be.”

The film feels significant and substantial, compensating for the coldness of its central figure with its unflinching depiction of his deterioration and death. It also ends with a lovely grace note set around the state law that requires inmates to be fingerprinted one last time after their deaths.