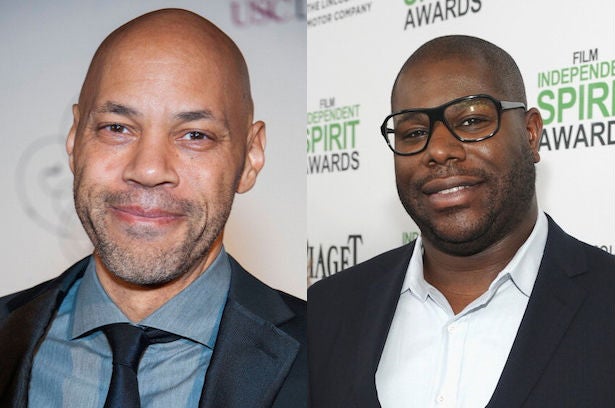 Long before each came away with an Academy Award, “12 Years a Slave” director Steve McQueen and screenwriter John Ridley were embroiled in a bitter feud regarding credit for the film’s Oscar-winning screenplay, a fight they kept quiet for the good of the campaign before it came to a head Sunday night at the Dolby Theatre.

Ridley turned down McQueen’s request for shared screenplay credit, TheWrap has learned. He won the Oscar for Best Adapted Screenplay on Sunday and did not thank the director in his acceptance speech, striding past him on his way to the podium but pausing to hug director David O. Russell. Some observers interpreted McQueen’s unsmiling applause as half-hearted (see gif).

McQueen later took the microphone at the end of the evening when “12 Years a Slave” won Best Picture, and made no mention of the writer. While McQueen lost the Best Director award to Alfonso Cuaron (“Gravity”), he was one of five producers to win Best Picture for “Slave” along with Brad Pitt, Dede Gardner, Jeremy Kleiner and Anthony Katagas.

Apparently, the bad blood between McQueen and Ridley has persisted for some time. McQueen has paid respect to Ridley’s contribution in interviews, though he has never been effusive in his praise, not that McQueen often is (outside of Michael Fassbender). An individual familiar with the frosty situation tells TheWrap that McQueen has iced Ridley out to the point of rudeness — he barred people from speaking to Ridley and insisted that the writer be seated at separate tables at awards shows late in the season, including the BAFTAs.

Also read: Oscars: How ’12 Years a Slave’ Won the Big One

That’s where McQueen berated Ridley’s wife while the writer was in the bathroom, trying to snatch up her BAFTA souvenirs and leaving her in tears, according to two insiders who passed along details of the outburst.

“12 Years a Slave” took the top prize at the BAFTAs that night and McQueen failed to thank Ridley during his acceptance speech. That was no oversight, since McQueen read his prepared speech off a piece of paper. Additionally, at the Golden Globes, McQueen didn’t thank Ridley until another producer whispered in his ear and reminded him to pay his respects, if only to prevent the media from speculating about the growing rift.

While some hoped McQueen and Ridley could settle their differences by Oscar night, it was not to be, as ABC cameras caught McQueen in the middle of what appeared to be begrudging applause when Ridley’s Oscar win was announced.

McQueen tapped Ridley to work on a separate slavery-themed project that eventually led to “12 Years a Slave” after McQueen’s wife discovered the book, which Ridley subsequently agreed to adapt on spec. McQueen had a hand in shaping the script that Ridley turned in, but when he asked the writer for shared credit — not uncommon in Hollywood — Ridley politely declined, an individual with knowledge of the situation told TheWrap.

McQueen was nonplussed and appealed to Fox Searchlight, which ultimately sided with Ridley. Brad Pitt, who produced “Slave” and plays a small role in the film, was even forced to step in at one point and mediate. (It didn’t help that Pitt was also in the midst of a PR battle with Paramount over the fact that his company Plan B, based at the studio at the time, failed to offer it a chance to finance and distribute “12 Years a Slave” before taking the project to New Regency.)

McQueen begrudgingly agreed to hold his tongue for the sake of the movie. He, Ridley, Pitt and Fox Searchlight executives all knew what was at stake — and how easily a Best Picture win could slip through their fingers if public discord leaked to the media.

Their silence proved to be a wise decision: The slavery drama ended up winning three Oscars, including Best Picture, which McQueen accepted as a producer; and adapted screenplay, which Ridley accepted on his own behalf.

Fox Searchlight and representatives for McQueen did not respond to repeated requests for comment by TheWrap. A representative for Ridley said she could not reach him but that the writer had thanked McQueen in previous speeches.

Coincidentally, Ridley has been in a similar situation before, having gone toe-to-toe with David O. Russell over the screenplay for “Three Kings.” Ridley wrote the original script on spec but it was so heavily rewritten by Russell that he only received a ‘story by’ credit, a snub that still rubs the writer the wrong way.

No matter: McQueen and Ridley both woke up Monday morning next to a little gold man named Oscar.

As they say, winning heals everything.