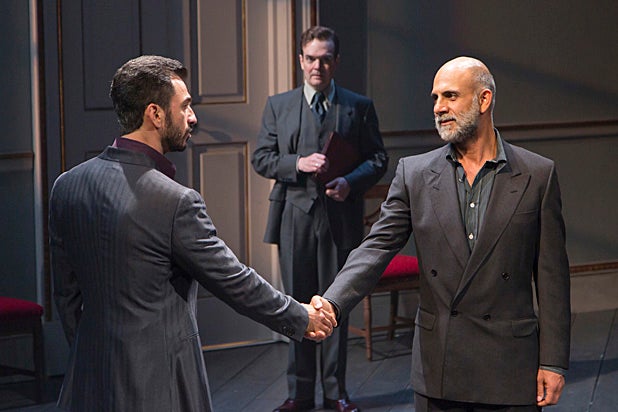 It’s not every season that a new play clocks in at a leisurely three hours, puts 15 actors on stage, and most astoundingly, features two intermissions. Tracy Letts‘ “August: Osage County” from 2007 comes to mind, but that’s a family soap opera.

J.T. Rogers’s play, “Oslo,” which opened on Broadway Thursday with virtually the same cast as its predecessor at the Lincoln Center’s Mitzi E. Newhouse Theater in New York, is much grander, almost Shakespearean stuff. He brings to the stage nothing less than the inspired, complicated subterfuge that was the peace negotiations between Israel and the PLO that led to the Oslo Accords of the 1990s.

The Oslo Accords were orchestrated by Mona Juul and Terje Rod-Larsen, who worked as officials in Norway’s foreign ministry. To their credit, Jennifer Ehle and Jefferson Mays play this real-life married couple, making them every bit as colorless as you’d expect mid-level diplomats to be.

But there’s nothing bland about their scheme: Since it’s against Israeli law for any official to meet with the Palestine Liberation Organization, Juul and Rod-Larsen plan for the two Palestinians, Ahmed Qurie  (Anthony Azizi) and Hassan Asfour (Dariush Kashani), to begin their clandestine negotiations with a couple of professors from the University of Haifa, Yair Hirschfeld (Daniel Oreskes) and Ron Pundak (Daniel Jenkins).

That’s basically the first act of “Oslo.” The anxiety and fear of disclosure increases dramatically in the second act when an Israeli official, Uri Savir (Michael Aronov) of the foreign ministry, enters the picture. As opponents on stage, Azizi and Aronov are extremely well-matched in the size of their grandstanding egos. Seemingly, these kinds of international agreements only get made because some players, like Juul and Rod-Larsen, have the audacity to remain faceless while they manipulate the outsize personalities in the room.

In the third act, the drama reaches the boiling point when Israel’s Foreign Minister Shimon Peres (Oreskes) enters the negotiations via telephone, and the U.S. government is informed, but somewhat later.

Rogers and director Bartlett Sher are good at telling a complicated story, creating suspense, and keeping over 20 characters from merging into one another. But to achieve these not inconsiderable ends, “Oslo” sometimes stoops to the level of boulevard theater despite its mighty political themes. Too many of the characters are emerge only as broad types. Certainly we never confuse the Israelis and the Palestinians, but often that’s because the one group indulges in schmaltz while the other never stops shouting.

There’s also a Norwegian housekeeper (Henny Russell) who recalls Loretta Young in “The Farmer’s Daughter” and whose scrumptious waffles are credited with world peace. Most superficially written and performed is Juul and Rod-Larsen’s boss, Norway’s Foreign Minister Johan Jorgen Holst (T. Ryder Smith), who is reduced to something of a buffoon whenever he’s at a loss for words, which is often, and he repeats the F-word four times in quick succession.

Rogers even indulges in a bit of real Broadway shtick. Just as Neil Simon liked to make fun of New Jersey and the boroughs, Rogers turns Haifa into the butt of a few jokes. Instilling superiority in an audience is always good for laugh.

Rogers captures the mechanics of the negotiations and Sher’s direction keeps them moving at hyper speed. What we aren’t given during the course of this three-hour play is a character study. Who are Juul and Rod-Larsen? They narrate the drama, give a great deal of exposition, and they keep each other’s egos to the size of a peanut. In “Oslo” they emerge more as devices than characters.