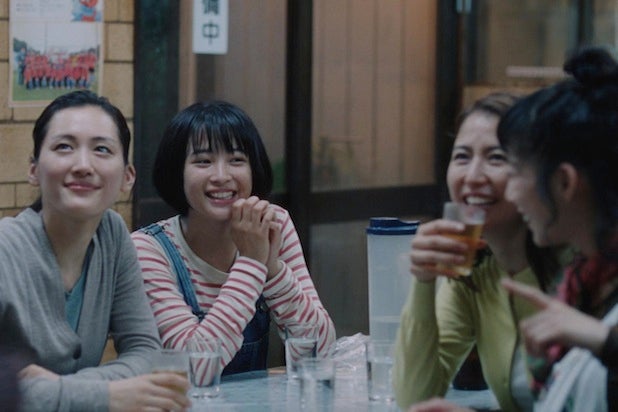 There’s an instructive moment late in Kore-eda Hirokazu’s “Our Little Sister” (“Umimachi Diary”), which premiered at the Cannes Film Festival on Thursday on the heels of its acquisition by Sony Pictures Classics.

It’s a fireworks scene — a sequence in which all the main characters watch a pyrotechnic display in a small Japanese village. At first we see it from above, looking down on a boat as the explosions turn the sea red; then we see the faces of a group of teens who are watching from the boat. Finally Kore-eda cuts to a group of adults watching the same fireworks, and for the first time we actually see a few flashes of pyrotechnics — but in the background, framed by the characters who are far more important in the frame.

A fireworks scene largely without fireworks is a convenient metaphor for the film itself. Kore-eda, whose previous films include “Like Father, Like Son,” “After Life” and “Still Walking,” is not a filmmaker who goes for the big flash when the small moment will do. “Our Little Sister” is resolutely quiet and understated, made up of the little rituals of life: preparing meals, talking about food, skirting issues rather than making a big deal out of them.

If it works – and to a great degree, “Our Little Sister” does – it’s because there’s a world in Kore-eda’s quiet moments, and because the film is just plain lovely. The story, drawn from the Japanese manga serial “Tales From a Seaside Town,” deals with three sisters, long estranged from the father who left their mother for another woman, who suddenly discover that they have a 15-year-old half-sister from their father’s second marriage.

They find this out when wife No. 2 dies, and they impulsively offer to take their new sister into the home they share. At that point, nothing much happens, and life happens: The oldest sister is in a relationship with a married man, another goes through her own dating woes and they all have daddy issues, but the drama takes place under a placid surface, and Kore-eda lets things unfold with the utmost patience and care.

The director’s last film, “Like Father, Like Son,” was based on a somewhat gimmicky premise (albeit it one based on true events in which Japanese hospitals mistakenly sent couples home with the wrong newborn babies), which sometimes made its devotion to the small rituals of life feel forced. There’s nothing like that in “Our Little Sister,” which drew a sustained ovation from the audience at its Thursday afternoon premiere in the Grand Theatre Lumiere.

The film is sentimental, to be sure, and so deliberate that it could lose some viewers more accustomed to dramatic and literal fireworks. But for every moment that comes dangerously close to melodrama, several play the heartstrings so beautifully that only a real grump would complain.

“Our Little Sister” has the makings of a smart pickup for Sony Classics, which will be back in the Cannes spotlight on Friday with its new Woody Allen movie, “Irrational Man.” And it’s a nice sign that this year’s festival, after only one day, is strong and varied.

After all, this film screened in the same theater that had kicked off the day with “Mad Max: Fury Road,” and then shifted to the gothic strangeness of “Tale of Tales.” The fact that they were all in the same theater, and part of the same festival, is an odd and wonderful tribute to Cannes.