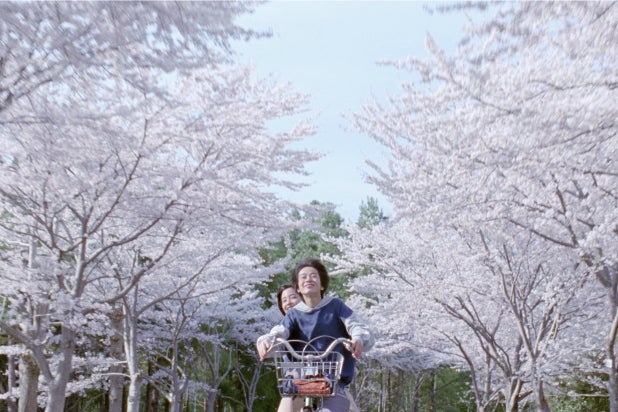 In “Our Little Sister,” the Japanese siblings referenced in the title attend three funerals. They share meals frequently and giggle constantly. The four sisters always say “please” and “thank you” and talk about kindness. They garden, give each other pedicures and borrow one another’s clothes.

As graphic novel estrogen-fests go, it’s a tale that rivals the complete output of Alison Bechdel.

Acclaimed director Koreeda Hirokazu (“After Life,” “Still Walking”) took Yoshida Akimi’s manga about three grown sisters who meet their half-sister at their mutual father’s funeral and painted it onscreen in a lovely slog. Though Koreeda’s compositions are often picturesque, such as a close-up of youngest daughter Suzu’s face as she rides on the back seat of a boy’s bike, sun beaming off her face and a breeze running through her hair, the film’s two-plus-hour running time is a patience-tester. After all, how many times can you hear a young woman exclaim that a dish is “Tasty!” or “Delicious!” before you start thinking about dinner yourself? And will they ever stop chirping in familial delight? 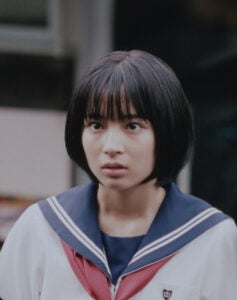 Turns out that they eventually do, but the emotional core of “Our Little Sister” is a long time coming. Teenage Suzu (Hirose Suzu) barely gives it a second thought when her eldest half-sister, Sachi (Ayase Haruka), invites her to leave her mother (the mistress of the sisters’ father) and her rural town to join their “girl’s dorm” in the city. Living in the home still owned by their mother, Sachi, Yoshino (Nagasawa Masami) and Chika (Kaho) are thrilled to add Suzu to their domestic setup, once even staring at her like one stares at an infant when Suzu passes out after accidentally drinking alcohol.

You’ll have the urge to push the giddy siblings away with some police tape and a stern “Nothing to see here,” but in vino, veritas: During a semi-conscious moment, the typically preternaturally joyful Suzu cries out that her mother’s an idiot and so was her father. This is not the smiling girl who ran after her soon-to-be housemates’ train! Yet her wound is given but a fleeting moment. There will be subsequent talk about the behaviors of all the parents and children involved — you get a hint of this when none of the sisters seem particularly upset over their dad’s death — but you have to wait to feel its cutting.

In the meantime, the film seems inconsequential and is frequently dull. Firmly episodic, “Our Little Sister” occasionally falls into a rut in which it’s little more than scenes of the siblings eating or of Sachi and Yoshino arguing. There’s some romance, most pointedly Sachi’s involvement with a married man. When Suzu blurts out that her mother is a bad person because she fell for a married man, Sachi is taken aback and rethinks her decisions.

When the three sisters’ mother shows up for the second funeral of the film, things get a little more real. Abandonment and the notion of being a “bad daughter” are brought up, along with an argument of whether she has the right to sell the home her girls have been taking care of — without even seeing her — for over a decade. There’s discussion of death, with Sachi being moved to the new terminal ward in her hospital and Yoshino, a banker, discovering that a beloved local will be moving into it soon.

But the real wallop comes from Suzu, who’s talking about life the way teens do with one of her male friends. She’s thinking of how she left her mother and other family complications. And she says, “Someone is always hurt just because I exist.” The “always” makes the statement sound like a stretch, or perhaps as if some prominent details from the graphic novel didn’t make the cut. But the moment gets you thinking — and finally, it’s about something other than food.