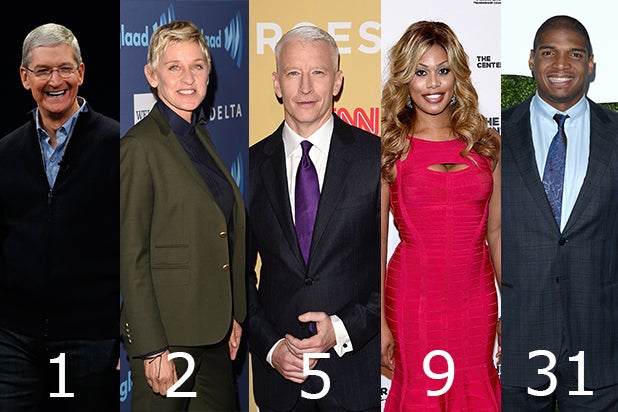 Cook, who has an estimated net worth of $400 million, runs one of the largest technology companies in the world, and was now voted as the most powerful gay man in the United States. Cook came out last October, which makes him the only openly gay CEO in the Fortune 500 list. Apart from the release of the iPhone 6 raising the company to a remarkable high, he also added three women to Apple’s executive team to make it commit to pursuing more women for the board of directors.

Degeneres was dubbed second, and for good reason: She hosts a top-rated syndicated talk show, has a massive social media following, a series of bestselling books, three new shows (with five more on the way), two stints as Oscar host on her resume, and she tweeted the most-shared selfie in history. Also, she is now the producer of her own company, A Very Good Production.

MSNBC television host Rachel Maddow came third. Although the ratings for MSNBC have slipped a little this year, Maddow still remains a political example for the media. She also continues to tackle topics like women’s reproductive rights, immigration reform, LGBT rights, and ongoing threats of a government shutdown.

This year’s list includes a multitude of television personalities, politicians, members of the media, activists and business luminaries.

See the complete Top 50 at Out.com.