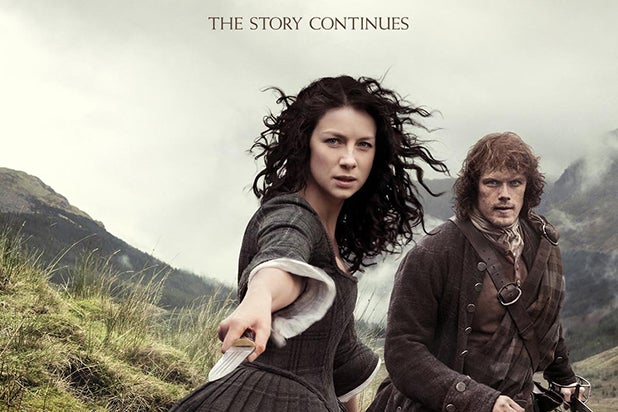 The so-called #Droughtlander is almost over. Starz’s “Outlander” returns for the second half of Season 1 in April, and the network has released new posters teasing the final eight episodes with a clever throwback to the show’s original key art.

While the original poster had Claire (Caitriona Balfe) reaching back for her husband Frank while running towards Jamie Fraser (Sam Heughan), the new poster has Claire a little bit more in charge of her own destiny.

She wields a knife toward the camera, and a second poster reveals she’s holding off Black Jack Randall (Tobias Menzies), the 18th-century villain who just happens to look exactly like the husband she left behind in the 20th century.

Produced by Sony Pictures Television, “Outlander” tells the story of a combat nurse from 1945 who is transported through time to 1743 Scotland. The married Claire finds herself drawn to Jamie, who she’s forced to marry for her protection. The series also stars Graham McTavish, Duncan Lacroix, Grant O’Rourke, and Stephen Walters.

“Outlander” returns for the final eight episodes of Season 1 on Saturday, April 4, 9 p.m. ET on Starz.