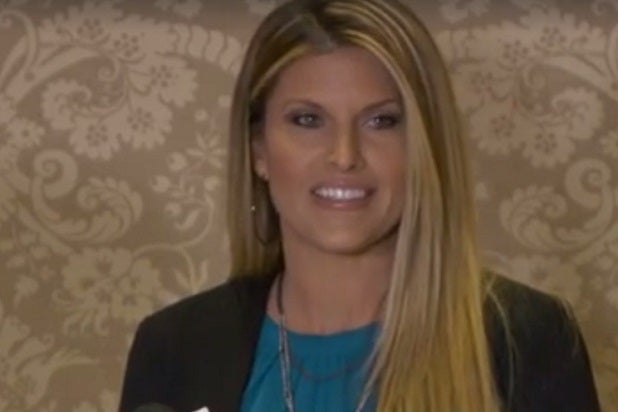 A former beauty pageant contestant who accused Donald Trump of acting inappropriately toward her has responded to the GOP presidential nominee’s threat to sue his accusers, telling reporters on Friday, “I am ready for this battle.”

Accompanied by her attorney Gloria Allred, former Miss USA Pageant contestant Temple Taggart appeared in Salt Lake City, Utah, to say that she would not back down in the face of Trump’s threat of legal action.

“I am not afraid of you, Mr. Trump,” Taggart said. “If you carry out your threat to sue me, I will defend myself, and now I have an excellent legal team that will fight for me.”

Taggart continued, “I am ready for this battle, but there shouldn’t be one. Instead, you should have the decency to admit what you did to me, and you should take responsibility for what you have done to other women.”

Taggart claims that Trump kissed her on the lips without her consent in 1997, when she was representing Utah in the Miss USA Pageant.

While she initially excused Trump for the alleged kiss, reasoning that it was an “East Coast” way of greeting people, Taggart said that Trump “embraced me and kissed me again a second time” during a meeting with him at Trump Tower in New York.

“It was that second kiss that made me wonder what his intentions really were,” Taggart said Friday. “What he did made me feel so uncomfortable that I ended up cutting my trip short, bought my own plane ticket, flew home, and never spoke to him again.”

Trump has been accused of sexual misconduct by numerous women, accusations that the current political candidate has adamantly denied.

During a speech in Gettysburg, Pennsylvania, on Saturday, Trump threatened to sue his accusers after the election.

“Every woman lied when they came forward to hurt my campaign,” Trump said. “Total fabrication.”

“The events never happened. Never,” he continued. “All of these liars will be sued after the election is over.”