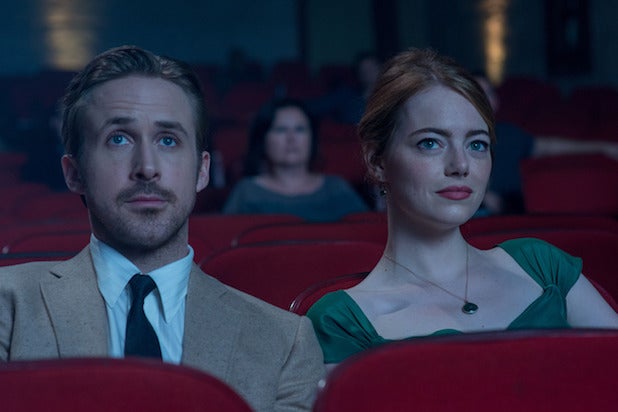 The four major Hollywood guilds have now named their favorites, bringing a bit of clarity to the Oscar race just as nominating ballots are due.

And in mid January, the 2016 awards race looks pretty much the way it did in early September: With “La La Land” on top, and everybody else wondering if it can be beaten.

That puts “La La Land” in a category with “Moonlight,” “Manchester by the Sea” and “Arrival,” films that also received nominations from all four guilds and have positioned themselves well in the Oscar race.

Here’s a guide to the pluses and minuses of the 13 films that received nominations from the DGA, PGA, WGA and SAG, along with one other contender that was shut out by the major guilds but shouldn’t be ignored (because you can’t ignore Martin Scorsese). I’ve organized them roughly in order of the likelihood that they get Oscar nominations and a Best Picture win.

“La La Land”
PLUS: It won a record seven Golden Globes. It has DGA, PGA and WGA nominations to go with two individual acting noms from SAG. As a grandly entertaining musical, it has the dazzle factor that other contenders don’t, and a degree-of-difficulty factor because you shouldn’t be able to pull off an original musical that works this well in 2016. It’s set in and around Hollywood, which Hollywood voters love. And as a big contender in cinematography, music, production and costume design and sound categories, it should end up with more Oscar nominations than any other movie. At this point, it’s hard to imagine anything else beating it.

MINUS: It didn’t get a SAG ensemble nomination, which means it has to become the first film since “Braveheart” to win Best Picture without that nom. (But since Emma Stone and Ryan Gosling dominate the film to the exclusion of the rest of a small cast, it’s understandable that SAG didn’t see it as a true ensemble.) The Globes sweep could help contribute to a backlash on the grounds that it’s not that good, it’s mere escapism and this isn’t the right year for a movie in which the only black character is a philistine who is watering down jazz. (For the record, I think those are all weak arguments and I can’t see the backlash coalescing around any other contender.)

“Moonlight”
PLUS: Along with “Manchester by the Sea,” it’s one of only two films that landed DGA, PGA and WGA nominations, plus an all-important SAG ensemble nod. It is the clear critical favorite of 2016, and conversations with voters show that it is loved in a way that no other contender (maybe not even “La La Land”) can match. The Academy’s preferential system of ballot counting rewards films with passionate support and guarantees that it will be an easy Best Picture nominee. And in a year in which diversity and inclusion have been keywords, the symbolic importance of a moving film about a young, black, gay man is significant.

MINUS: “Moonlight” won’t have any problem getting nominated, but can it forge the consensus it would need to win among a voting body that remains predominantly old, male and white? (In the final round of voting, you need consensus, not passion.) It has a better chance to do that than any other film except “La La Land,” but it remains very small and subtle to win on the biggest stage.

“Manchester by the Sea”
PLUS: The only other film that can boast of a SAG ensemble nod alongside DGA, PGA and WGA nominations, Kenneth Lonergan’s “Manchester” is another intimate film that easily has enough passionate adherents to give it a Best Picture nomination. Casey Affleck is a Best Actor frontrunner and Lonergan a top-tier Best Original Screenplay contender, which will help keep it in the minds of voters in two of the Academy’s biggest branches. It can leave viewers emotionally devastated in a way that few other films in the running can accomplish.

MINUS: There’s a reason early ads for the film used quotes spotlighting its humor – because “Manchester” has the reputation of being a very dark, depressing movie. The fact that, like “Moonlight,” it’s wrenching in a good way can be a tough sell to more conservative voters; that’s not a problem that’ll keep it from getting a nomination, but it could be one when it comes to the final vote.

“Arrival”
PLUS: When Denis Villeneuve’s film premiered at the fall festivals, initial word was that for all its virtues, it was the kind of cerebral sci-fi movie that just doesn’t get awards. But the quality of the filmmaking and the emotional punch of Amy Adams’ performance have kept it in the conversation all season, and the DGA, PGA, WGA and SAG (for Adams) nominations make it a clear contender. Villeneuve getting into the DGA lineup is particularly crucial: Since the Best Picture lineup expanded in 2009, only one out of the 35 DGA nominees (2011’s “The Girl With the Dragon Tattoo”) has failed to land an Oscar nomination.

MINUS: It’ll get lots of nominations, both for Best Picture and in below-the-line categories, but it’s not likely that a genre movie can be the one to unseat “La La Land.”

“Lion”
PLUS: It got nominations from all of the major guilds except the WGA – and it has a good excuse there, because it wasn’t eligible. Garth Davis was the biggest surprise in the DGA field, but his presence there means his film is all but assured a best-pic nod. (See: “Arrival.”) It’s a human drama that makes you feel good – the kind of movie that Oscar voters like, and the kind they don’t have too much of this year. And it’s the only shot for Harvey Weinstein, a wily strategist even without the campaign budgets he used to have.

MINUS: Lots of people think the first half of the film, featuring young actor Sunny Pawar, is better than the second half. In a field of more daring contenders, “Lion” runs the risk of seeming to be the most conventional, Oscar-baity movie.

“Fences”
PLUS: It made the cut with the PGA, WGA and SAG — the only major guild award it didn’t get was the DGA, where Denzel Washington was always a long shot. Washington and Viola Davis are virtual locks for nominations, and she’s all but assured a Best Supporting Actress win. It is the most actorish of the main contenders, and the Actors Branch is by far the largest branch of the Academy.

MINUS: Washington didn’t try to open up the play too much or cut Wilson’s text too much – and as a result, the most common complaint among Academy members seems to be, “It’s just a filmed play.” There are probably enough actors in the Academy to land it a Best Picture nomination, but there may be too many non-actors (or actors who think a win for Davis is enough) to give it a win.

“Hidden Figures”
PLUS: It has three of the four big guilds: DGA, PGA and SAG. It is an unabashedly crowd-pleasing true story, a genre beloved by the Academy. In the year of #OscarsSoWhite, this is the one movie in which African-Americans are ultimately triumphant.

MINUS: It faces the same thing that “Lion” does, the nagging thought that it might be too conventional, too much a commercial movie geared for awards. In the year of #OscarsSoWhite, it might feel timid to honor this over the more artistic “Moonlight.” Like “The Help” before it, “Hidden Figures” is likelier to make the semifinals than to go all the way.

“Hell or High Water”
PLUS: With a plot line about predatory big banks preying on the working class, it might be the timeliest contender this side of “Zootopia.” The PGA and WGA went for it, and SAG gave the much-loved Jeff Bridges a supporting nod. It is the one film from the first half of the year that voters remember fondly, and it seems to have grown in stature rather than been forgotten over the fall.

MINUS: It’s a small-scale genre flick, a modern indie Western, without the sweep for which Oscar winners are known. But it’s one of those little movies for which a nomination would itself be a win (others: “Winter’s Bone,” “Beasts of the Southern Wild,” “Room”), and it is in a pretty good spot to get that.

“Hacksaw Ridge”
PLUS: It got a Producers Guild nomination, and Andrew Garfield is getting acting-awards attention for this movie over his role in “Silence.” It’s the kind of visceral, energetic filmmaking that is sometimes missing from the Oscar race. It has a tempting off-screen narrative in the redemption of former Hollywood pariah Mel Gibson.

MINUS: Even members of the Hollywood Foreign Press Association, who by all reports love Gibson, couldn’t bring themselves to give him or his movie any awards. He’s no longer persona non grata, but maybe he hasn’t moved beyond persona semi grata. And for every voter who loves the movie, there seems to be another who thinks it’s a big cartoon.

“Loving”
PLUS: Jeff Nichols’ understated drama about an interracial couple fighting miscegenation laws in the 1960s landed a WGA nomination to go with strong reviews. Ruth Negga and Joel Edgerton are in the thick of the conversation in the acting categories, so the Academy’s huge Actors Branch ought to be paying attention.

MINUS: The failure of both Negga and Edgerton to land SAG nominations was one of the biggest unpleasant surprises handed out by those voters. While one or both are likely to fare better with the Academy, is their film too quiet and subtle for Oscar voters?

“Silence”
PLUS: It’s Martin Scorsese. Some critics think it’s a masterpiece. If a small number of Academy voters agree, the preferential system could help it squeeze out a Best Picture nomination.

MINUS: It’s long and slow, and many people find the conclusion unsatisfying. Others don’t want to see it because they’ve heard it’s long and slow. Even though it’s Scorsese, it was shut out by all four major guilds, settling for nominations from the American Society of Cinematographers and the Visual Effects Society. While Best Picture remains a possibility, its best shot is below-the-line nominations.

“Captain Fantastic”
PLUS: A surprising SAG ensemble nomination suggested that Matt Ross’ funny and subversive story about a father raising his kids off the grid might make noise with awards voters, who ought to pop in those screeners and consider it for things like Best Picture.

MINUS: The failure of any other guilds to follow suit was a blow to its chances. While star Viggo Mortensen probably has the best shot at Oscar recognition, and Ross’ screenplay has a shot with the often-adventurous Writers Branch, Best Picture remains a complete longshot.

MINUS: “Moonlight” and “Loving” weren’t in the adapted category at the WGA, but they are at the Oscars, which will make it harder for “Nocturnal” to even get a writing nod. Stylish and disturbing as it may be, the movie has no real Oscar buzz.

“Deadpool”
PLUS: It got nominated by the Writers Guild and the Producers Guild. It looks, sounds and feels like nothing else in contention.

MINUS: It’s an R-rated, violent, comedic comic-book movie. There’s virtually no way enough Academy voters put it at their top of their ballots.

Bottom line: “Moonlight” is something special, but the race is still “La La Land’s” to lose.