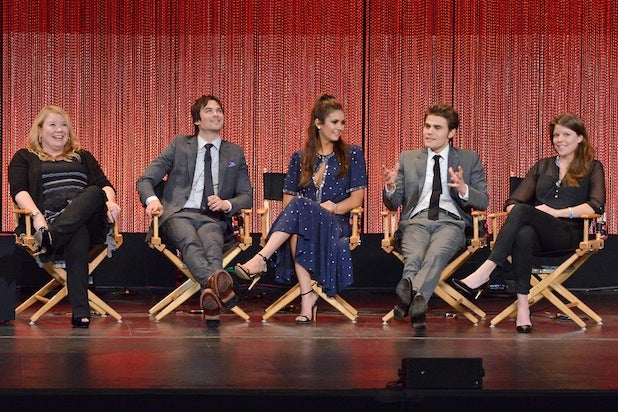 “The Vampire Diaries” executive producer Julie Plec revealed some of the thought process behind matching characters up and killing characters off during Saturday’s PaleyFest session at L.A.’s Dolby Theater.

Because of the timing, fans really wanted to know the status of Elena (Nina Dobrev) and Damon’s (Ian Somerhalder) relationship. On the last episode, they officially broke up and then they officially hooked up.

“Damon and Elena recognize all the different elements of the codependency of their relationship,” Plec said. “And that doesn’t necessarily mean that they can’t or won’t be together, it just means they have to have some actual legit and grown up conversations about it.”

Also read: ‘Originals’ Star Claire Holt Talks Exiting CW Show: ‘It Was So Tough for Me’

She continued, “And if those conversations continually end up in sex, then they’re eventually going to have to have a conversation about that too. We just want to play them as human as possible despite their inhuman experience.”

No matter who fans pull for, Plec recalled a previous experience in which she helped to decide who would end up together on cult favorite “Dawson’s Creek” to explain how these decisions are made.

“I remember sitting in [Kevin Williamson‘s] office when he was helping on writing the finale to ‘Dawson’s Creek,'” Plec recalled. “And he said, ‘Who should Joey pick? Dawson or Pacey?’ Well, she picked Pacey when all was said and done, but the love triangle that grew out of that show wasn’t being driven by any particular ending. It was life, it was real.”

Also since the show just killed Katherine (also played by Dobrev), the topic of the show’s many deaths came up. Plec explained her take on deciding who will meet their demise.

“Not to be glib, but most new characters are created to die,” she said.

Other notable reveals during the panel:

Is Katherine really gone? “We really wanted to pay off her character by giving her the most epic death possible,” said executive producer Caroline Dries. “I would say never say never.”

Will Caroline (Candice Accola) ever move over to “The Originals” in order to finally be with Klaus (Joseph Morgan)? “I think Caroline Forbes is such a crucial, crucial element as a sparkly personality, as a beautiful soul, as a fascinating character on ‘The Vampire Diaries,'” said Plec. “And I think taking her off that show would be very damaging to the show whether or not we want to see these two together.”

Will Elena ever truly be happy and have free will? Plec said yes and then teased, “We get into that in next couple episodes.”