After a hot start that had it on pace to top $60 million for the weekend, Paramount’s "G.I. Joe: The Rise of Cobra" slowed 18 percent Saturday, taking in $18.3 million in 4,007 North American theaters.

The $175 million action film still will finish the weekend with $56.2 million, according to studio estimates, ahead of original estimates that pegged it at below $50 million.

The PG-13-rated film, which Sony said costs $38 million to produce, took in $20 million for the weekend, with over-50s comprising more than half the audience.

For , it is becoming a predictably winning formula: adapt a Hasbro toy line into an expensive, effects-heavy action film that costs a ton, ignore the reviews, and watch it open big.

The strategy worked again Friday, with “G.I. Joe: The Rise of Cobra” taking in $22.3 million in 4,007 North American locations, according to Hollywood.com estimates, putting it on track for a $60.3 million weekend, the third biggest three-day period in August ever. Optimistic estimates for the $175 million film going into the premiere had it pegged at around $50 million.

With the youthful male throngs rushing into “G.I. Joe,” Sony effectively counter-programmed a smart PG-13-rated comedy, “Julie and Julia,” which made $6.4 million at 2,354 locations to finish second at the domestic box office, according to studio figures. The film is on pace for a $19.3 million weekend, the high end of Sony’s “high-teens” projection.

In fourth place Friday, Universal’s R-rated Judd Apatow dramedy dropped 70 percent from its premiere a week earlier, taking in just $2.6 million and on the way to finish its second weekend with just $40.6 million in domestic revenue.

Universal had hoped this curveball Apatow offering, an uncharacteristically somber two-hour, 16-minute effort starring Adam Sandler as a terminally ill version of himself, would eventually find some kind of audience. But the prognosis for the studio making back the $91.5 million it spent to produce “Funny People,” not to mention the $70 million it spent to market it worldwide, now seems pretty grim in its own right.

and co-financier Spyglass Entertainment, meanwhile, had plenty of their own dollars riding on the Stephen Sommers-directed “G.I. Joe,” which cost $175 million to produce and well north of $100 million (and counting) to market worldwide.

“Joe’s” North American opening pales next to the $109 million premiere in June of “Transformers: Revenge of the Fallen,” another Paramount Hasbro toy adaptation.

But with foreign returns also expected to be robust this weekend, officials are expecting “Joe” to ultimately surpass $300 million globally. And with a share of toy sales, not to mention DVD revenue, the studio expects the film to finish in the black.

Likewise, in one weekend, Sony will have earned half of its reported $38 million production budget back on “Julie and Julia, a Nora Ephron-directed comedy starring Meryl Streep as culinary legend Julia Childs.

Also premiering this weekend, Rogue Entertainment thriller “A Perfect Getaway” earned $2.1 million on the way to a $5.4 million weekend. Rogue officials expected the film, distributed by Universal under service agreement, to earn between $5 million to $7 million.

There’s a lot riding on "G.I. Joe: The Rise of Cobra" … and not just at Paramount.

The Stephen Sommers-directed action film, opening Friday, will play a big part in determining how close this summer will get to last year’s record-breaking $4.2 billion summer take.

Since the season started May 1, total domestic box office revenue stands at $3.3 billion, according to Hollywood.com, less than a percentage point off 2008’s record-breaking pace. (For the entire year, the domestic box office is at $6.4 billion, up 7 percent from 2008 in total revenue and 3 percent in attendance.)

Paramount Executive Vice President Don Harris compared the race for the record to stopping at Baker en route from L.A. to Las Vegas.

“If you hit Baker, you better stop, because there’s nothing left until you hit the Nevada state line. From the standpoint of big, four-quadrant tentpoles, this is probably the last gasp,” he said.

August doesn’t always mean sleepy box office, but the titles this month won’t be big enough to get the summer into record territory. 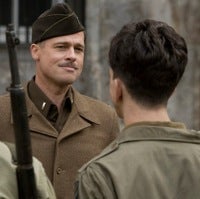 However, it’s the performance of “G.I. Joe” — the last legitimate popcorn movie of the summer, made at a cost of $175 million and predicted by some to take in as much as $50 million domestically this weekend — which Hollywood is watching.

In early July, summer 2009 was pacing about 5 percent ahead of 2008, with Paramount’s “Transformers: Revenge of the Fallen” and Fox’s “Ice Age: Dawn of the Dinosaurs” buttressing early-season gains made by films like Paramount’s “Star Trek,” Sony’s “Angels & Demons” and Fox’s “X-Men: Origins.”

After that point, however, the studio product line cooled significantly, with Warner’s “Harry Potter and the Half-Blood Prince” the only film released since then to pass the $100 million mark, while several R-rated comedies from big-name filmmakers, notably Sacha Baron Cohen’s “Bruno” and Judd Apatow’s “Funny People,” both from Universal, failed to find traction.

“We started off the year in a very strong place, year-to-year comparison-wise, but we’ve sort of given back a lot of that,” said Fox domestic distribution head Chris Aronson. “This past weekend was a good example.”

And meanwhile, the year-to-year comparisons got much tougher.

For example, at this precise point in time last year, Warner’s “The Dark Knight” was entering the fourth weekend of its run — a three-day period in which it still took in $26.1 million — on the way to a domestic take of $533.3 million and global revenue that would ultimately exceed $1 billion.

Universal’s “The Mummy: Tomb of the Dragon Emperor” also got off to a hot start on Aug 1, 2008, garnering $40.5 million domestically its first weekend on the way to making $401.1 million globally.

The net comparative result is a summer 2009 domestic box office that’s been down the past three weeks in a row year to year, bottoming out last weekend with a middling overall performance that was led by “Funny People’s” $22.7 premiere.

But “G.I. Joe” — Paramount’s second Hasbro toyline adaptation of the summer, following Michael Bay’s second “Transformers” installment, which opened to $109 million in June — could make the race at least close.

Tracking estimates put the film somewhere between $42 million to $48 million domestically for the weekend, but Harris believes that data doesn’t account for strong testing in African-American and Latino markets.

Meanwhile, the key marketing benchmark of “unaided awareness” about the film shot up 8 percent Wednesday among moviegoers surveyed.

The PG-13-rated “Joe” is “also getting strong presence from families, which we didn’t expect,” Harris noted. “When you add up the tracking, and the fact that the marketplace seems to be wide open in terms of competition, we have a very good chance to have an exceptional weekend.” 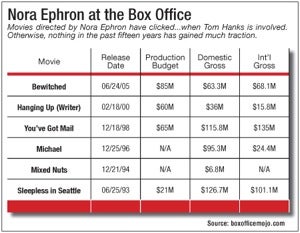 Premiering alongside “G.I. Joe” this weekend will be Sony’s Nora Ephron-directed “Julie and Julia,” starring Meryl Streep as culinary legend Julia Child. Sony sources said the film was shot for $38 million and should garner revenue in the high teens this weekend.

Such a performance for “Julia and Julia” would seemingly come at the expense of Apatow’s “Funny People,” which faces long odds in regards to profitability, with production sources noting that the film was shot for $91.5 million while costing another $70 million to market worldwide.

Also opening this weekend is Rogue Pictures’ vacation-gone-horribly-wrong thriller, “A Perfect Getaway,” starring Timothy Olyphant and Milla Jovovich and distributed by Universal under a service agreement. Rogue sources predict the film, which cost $14 million to produce, will take in between $5 million to $7 million this weekend.

For example, he said that Warner’s fourth “Final Destination” installment, which premieres Aug. 28 in 3D, should exceed 2006’s “Final Destination 3,” a film that took in $113.3 globally. And at the very end of the summer period, on Sept. 4, Fox is releasing comedy “All About Steve,” which will star Sandra Bullock, coming off a huge run on Disney’s “The Proposal” ($219.3 million globally to date).

“I think this is going to be a very nice August,” Viane added.