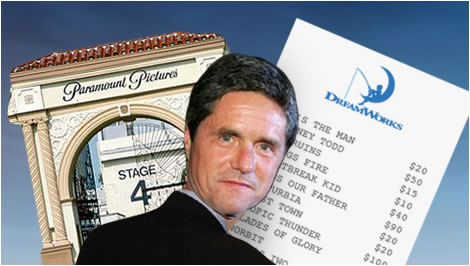 Only in Hollywood can you buy a company and not actually own it.

That’s the bottom line from a close look at the power shift in Hollywood this month,  with DreamWorks closing its deal with Reliance ADA, and Universal nabbing distribution rights to their movies.

Over on the Paramount lot this week, some executive is pacing in his office just across from the Sherry Lansing Theater and wondering: Didn’t we buy DreamWorks in 2005? And if we bought DreamWorks, why didn’t we get to sell it?

After all, even Harvey Weinstein had to hand over the Miramax name to Disney.

An analysis by one rival studio of the Paramount deal suggests that the loss to the major studio’s bottom line for its $1.6 billion purchase of DreamWorks in 2005 is some $250 million.

By my back-of-the-envelope estimate using published figures (which are usually massaged to the studio’s benefit), it’s more than that. And today, we see evidence of that in Paramount’s decision to tighten its belt. The studio announced it will be making only 20 films a year (watch this space, I predict other studios will follow) , and has consolidated operations. (Read the release here).

Here’s my analysis:  Paramount bought DreamWorks in 2005 for $1.6 billion, including $400 million in debt. It then made a cash-rich deal to sell the library for $900 million to a George Soros-related group.

That was the last of the good deals. In that time, the studio has released 16 DreamWorks films, which took in a total of $2.115 billion in worldwide box office revenues. A conservative estimate of the production cost of those films is $835 million, and you need to throw in another 30 percent ($250 million) on top of that for marketing costs. (Here’s a list; see for yourself.)

If you add it all up, that leaves revenues of $1.08 billion from the movies, with no factoring in overhead costs for the studio, which are considerable. But wait – even that’s too generous. You have to subtract the biggest hit in the group, “Transformers,” which was a Paramount-owned property anyway.

If you do that, the revenue number is reduced to a paltry $800 million or so. That’s perilously close to the $1.6 billion purchase price, minus the $900 million library deal. And, as I say, that includes no overhead or other development costs.

Here’s what Paramount bought: In 2006, “Dreamgirls,” which was only a modest box office success, and a bust at the Oscars. “Flags of Our Fathers” and “Letters from Iwo Jima” lost money. “She’s the Man” was a critical rout, and a box office loser too.

2007 was the one year DreamWorks saved Paramount’s bacon. The biggest hit was “Transformers,” though this property had been owned by Paramount to begin with. “Disturbia” and “Norbit” both made big money for the studio. There’s one year in DreamWorks’ column.

So now the wheel has come full circle.

Universal, which was left standing at the altar in 2005, gets the distribution business. That’s guaranteed 8 percent fees for distributing DreamWorks movies.

And Paramount, which foolishly thought it owned DreamWorks, gets to smile politely and wave good-bye as Steven Spielberg drives off the lot, taking the studio that Paramount owns with him.