Paramount reported Monday that the website for its small horror film, Paranormal Activity, was deluged with more than 230,000 “demands” from coast-to-coast, prompting the studio to expand distribution to 20 additional cities across the country beginning this Friday, October 2nd. 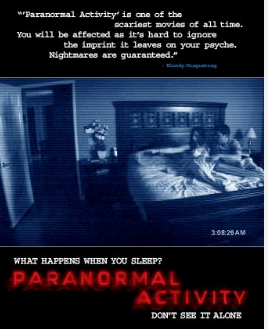 In an unusual marketing and distribution strategy, the studio has enlisted fans to "demand" release of the film in their area, via the movie’s website, www.paranormal.com.

The gambit is an experimental way of releasing the  low-budget film, which has played to sold-out crowds in exclusive midnight showings in cities across the country this past weekend, with fans driving great distances to be among the first to see the film in their town.

According to the studio, the cities with the highest on-line demand have been Los Angeles,New York, Chciago, Dallas, Houston, San Diego, Phoenix, San Francisco and many others. The film, which had merely a $15,000 budget, will continue to play exclusively as a midnight only showing.

The film tells the story of a young, middle class couple who move into what seems like a typical suburban “starter” tract house. They become increasingly disturbed by a presence that may or may not be demonic, but is certainly most active in the middle of the night.  Especially when they sleep.