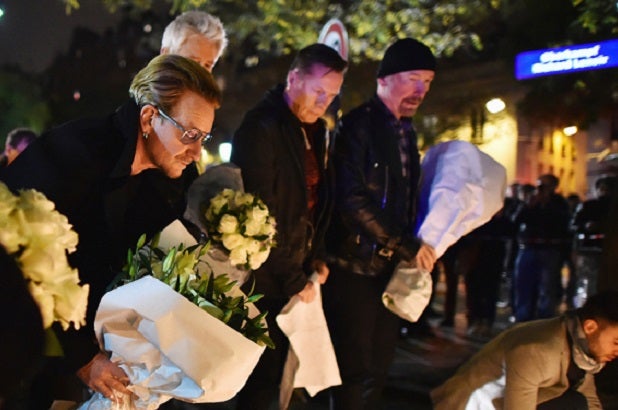 PARIS, FRANCE - NOVEMBER 14: Bono and band members from the band U2 place flowers on the pavement near the scene of yesterday's Bataclan Theatre terrorist attack on November 14, 2015 in Paris, France. At least 120 people have been killed and over 200 injured, 80 of which seriously, following a series of terrorist attacks in the French capital. (Photo by Jeff J Mitchell/Getty Images)

CNN saw the most growth in cable news in November while the number-one rated Fox News jumped to number 2 in all of basic cable primetime, propelled by its coverage of the Paris terror attacks.

CNN, which an insider told TheWrap spent millions on its Paris coverage, rose in the total day measure by 26 percent compared to the same time last year. The cable news net posted a 10 percent spike in the daytime 25-54 demo as well, according to Nielsen.

Primetime wasn’t as positive for the network as it was flat in total viewers and down 12 percent in the demo year-over-year.

This performance tracks with TheWrap’s previous report that the new harder news makeover for MSNBC has produced an uptick in viewers, while shrinking in the advertising-coveted demo.