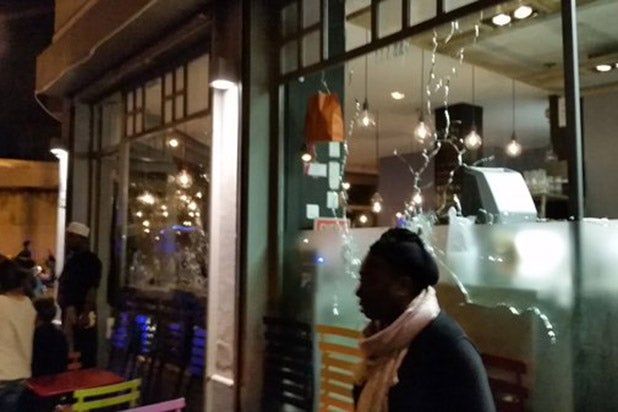 Terrorist attacks across Paris on Friday night resulted in more than 150 deaths, and eyewitness reports of the horrific bombings, shootings and deadly hostage situation are beginning to pour in through the media.

Two or three gunmen wearing all black stood at the back of the hall, opening fire on the crowd with automatic weapons, Pearce said. “It lasted for 10 minutes. Ten horrific minutes where everybody was on the floor covering their head.”

As he was fleeing the venue, Pearce said he saw a girl bleeding from multiple bullet wounds lying on the ground. He picked her up and carried her with him and ran, before putting her in a cab to the hospital. He went on to say doesn’t know whether or not she survived.

Marc Coupris, who was held hostage at the Bataclan, shared his experience with the Guardian, “It looked like a battlefield, there was blood everywhere, there were bodies everywhere,” he said. “I was at the far side of the hall when shooting began. There seemed to be at least two gunmen. They shot from the balcony.”

“Everyone scrabbled to the ground. I was on the ground with a man on top of me and another one beside me up against a wall. We just stayed still like that,” he continued. “At first we kept quiet. I don’t know how long we stayed like that, it seemed like an eternity.”

Xavier Barret, a sports photographer for L’Equipe, also talked to the Guardian about being held inside Stade de France following the bombings nearby.

No one was allowed to leave, he said, leading some people to run onto the field in a panic. “Most of the people were afraid, because by this time they had heard by telephone or on the internet that there were bombings outside, and in Paris,” he said.

Franck Benarroch and his girlfriend were also inside Stade de France when the bombings took place. “I think it was 20 minutes after the beginning of the match, we heard the first explosion. But we are used to hearing fireworks or loud noises in stadiums so we just assumed it was that,” he told Huffington Post Australia.

“Then the noise was heavier than usual and about 10 minutes after that we heard another loud noise. And 15 minutes after that another one. After the second one we started to worry,” he continued. It became clear the situation was serious when French President Francois Hollande was evacuated from the match.

Ben Grant was in a bar with his wife when it became the site of another shooting. “There are lots of dead people. It’s pretty horrific to be honest,” he told BBC. “I was at the back of the bar. I couldn’t see anything … We were held up in the bar because there was a pile of bodies in front of us.”