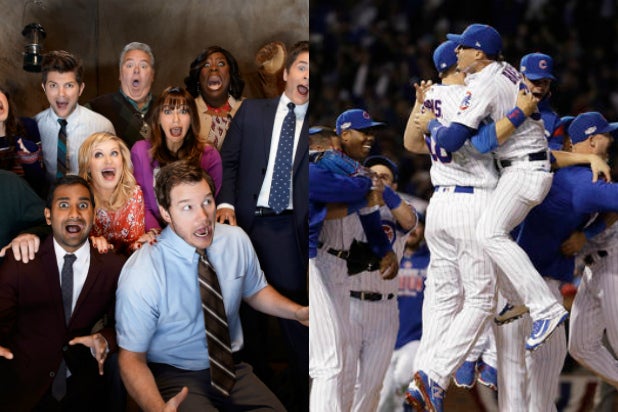 Last year, there was a lot of buzz surrounding “Back To The Future Part II” and its prediction that the Chicago Cubs would win the World Series in 2015. But while that prediction ended up being just one year off, “Parks and Recreation” managed to prognosticate the Cubbies’ World Series victory right on the nose.

In the second episode of the NBC comedy’s final season, which aired January 2015, Tom (Aziz Ansari) and Andy (Chris Pratt) travel to Chicago to find Tom’s ex-girlfriend, Lucy, in the spring of 2017. They meet up with Lucy pretending that Tom’s thinking about moving to Chicago to work for a non-profit, but he’s really trying to convince her to get back together and to move back to Pawnee with him.

Shortly after their first meeting, Lucy takes the two guys on a tour of Chicago, and one of the stops is Wrigley Field. Lucy is giving her case as to why Chicago is a great place to live, and one of her talking points is how “everybody’s in a good mood because of the Cubs winning the Series.”

Two years ago, in a season that took place in the summer of 2017: pic.twitter.com/p8jaYZNwcT

Jokes about the Cubs’ hopelessness an pop culture, but at the time this episode aired, it really felt like a cruel joke. The Cubs had just come off a brutal 2014 season in which they lost 89 games and finished dead last in their division. But “Parks and Rec” co-creator Michael Schur, an avid baseball fan, wrote the line into the episode believing that the Cubs’ strong minor league system would make them a contender in just a few years’ time.

Schur also recognized the strong team-building skills of Chicago’s general manager Theo Epstein, who served as GM of Schur’s favorite team, the Boston Red Sox, when they ended their championship drought in 2004.

“It’s one of those things where until it happens, it seems impossible,” Schur told The Washington Post. “But that’s what makes Theo Epstein amazing. He puts together these teams and after it happens, you’re like, ‘Oh, it was inevitable. They were just the best team.'”

Still, while baseball fans will flock to Netflix to gawk and laugh at Schur’s amazing prediction, he told The Post that he doesn’t want to take credit for it.