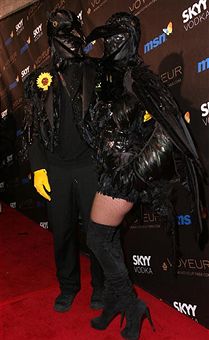 Who and what are those two ….??
Heidi Klum and husband Seal carried on their annual tradition of disappearing into costume with their over-the-top outfits at Klum’s Halloween bash on Saturday night.
As a pair of black crows (the birds, not the ‘90s rock band) the flashbulbs didn’t immediately start popping when the unrecognizable duo hit the carpet outside hotspot Voyeur. (Photo at left, courtesy of Getty Images).
For the 10th annual party, Steven Cojocaru pulled a “Howard Stern”/”Dennis Rodman” strolling in a full white bridal gown. Meanwhile, blogger Perez Hilton also cross dressed, predictably honoring his pal Lady Gaga with what turned out to be a popular costume around town.
Over at Skybar for a rare “cover the pool for dancing” party, Jim Carrey’s “Ace Ventura” look and Johnny Depp’s “Fear and Loathing in Las Vegas” gear were amongst costume winners from Hollywood’s proverbial “costume catalogue."
In honor of 2009 breakout hit “The Hangover”, Zach Galifianakis’ “bearded-baby-carrying weirdo” also had the flashbulbs popping throughout the night. 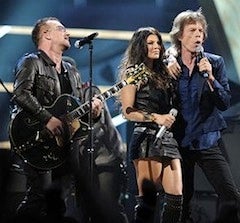 Ironically, the venue itself dressed up as one of its own ancestors: The Ian Schrager-founded property converted itself into Schrager’s “Studio 54” of NYC 70s/80s fame.
Earlier in the weekend, iconic musicians left their costumes at home for the Rock and Roll Hall of Fame’s 25th Anniversary Concert doubleheader at Madison Square Garden. Bono pulled out a Halloween treat with a surprise appearance by Mick Jagger (and the Black Eyed Peas’ Fergie) joining in a superstar rendition of the Stones’ “Gimme Shelter” on Friday night. (Photo at right courtesy of Getty Images)
If you weren’t lucky enough to see any of the special collaborations in person during the two night mega-concert (like Sting with Stevie Wonder, and Annie Lennox with Aretha Franklin) set your Tivos now: HBO will air highlights from the concert as a special on the Sunday night of Thanksgiving weekend, November 29.
HBO also put on a live show in LA last week. The cabler joined the Paley Center for Media to pry open the doors to Alan Ball’s writers’ room for their hit series “True Blood” on Wednesday night. (At left, the Paley Center’s VP/executive director Craig Hitchcock and HBO Entertainment President Sue Naegle flank Ball. Photo courtesy of Kevin Parry/The Paley Center) 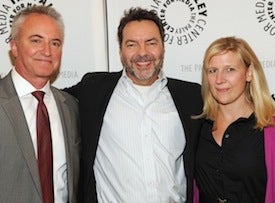 Ball and his writing teams fed a rabid crowd just a few spoiler-ish hints on the show’s third season currently set to premiere next June.