NBC’s “Godfather” of comedy, Lorne Michaels, called in his “capos” for a private pre-party on Saturday night. Michaels teamed with disciple Tina Fey and her co-star/employee Alec Baldwin to host an intimate “friends only” pre-game at the Sunset Tower before the talent spread out across town at other parties. (Pictured below, courtesy of AP/Casey Rodgers.) 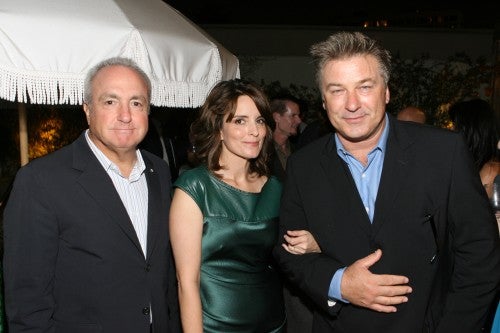 The casts of "30 Rock," "SNL" and even some "Mad Men" warmed up with 42 Below Kiwi Cosmos while spending time together for a few hours, before most headed over to NBC’s party at Spago. Mad Men Jon Hamm and Jon Slattery arrived together together while Will Arnett, Amy Poehler, Fey and Jeff Richmond had their town cars pulling up on Sunset in tandem. “30 Rock’s” Jane Krakowski and Katrina Bowden talked fashion while usual life of the party, Judah Friedlander, even busted a few moves on the dance floor.
Friday night, multi-nominee and $200 Million Man Seth McFarlane continued his political-campaign-style promo march to Sunday night’s awards handout, turning a last minute whistle stop in to a full on “Family Guy” blowout bash at Avalon. A 60-foot Peter Griffin inflatable doll greeted guests outside. Inside, level upon level of reserved tables awaited VIP fans like Alyssa Milano and “Breaking Bad” nominee Aaron Paul. 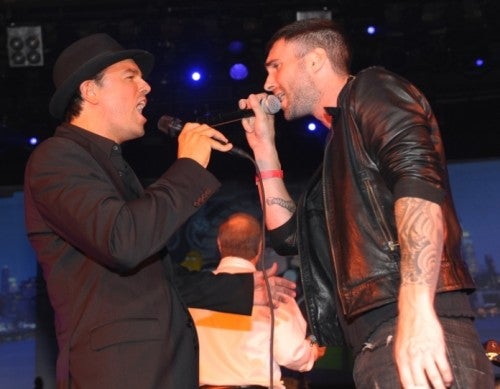 Maroon 5 front man Adam Levine joined Macfarlane on stage(photo at right courtesy of Wireimage.com), thanking him for using real musicians in his animated and live shows. Backed by a 50 piece orchestra, the two sang a modified version of Michael Jackson’s “Beat It” and Frank Sinatra’s “I Get a Kick out of You." Fast becoming Hollywood’s favorite speakeasy act, Macfarlane continues to threaten to bring his NC-17 live cabaret show to FOX’s airwaves as a special.
Besides Sunday night’s Academy-hosted Governor’s Ball, Emmy stars will flush out of the Nokia to parties across town. "Entertainment Tonight" and "The Insider" executive producer Linda Bell Blue promises to bring “the best of L.A. to downtown,” throwing a more “tightly listed” bash at the Vibiana church. Celebrity DJ Samantha Ronson will spin the tunes at the bash co-hosted by People magazine. Following in the footsteps of previous big name "ET" performers Duran Duran and Prince, Mary J. Blige will serenade the winners (and some losers who will want to come for the huge guest list alone).
Back in the 323, HBO unwraps a major four-stage party at the Pacific Design Center, while the usual big winners from Comedy Central will likely be clinking champagne glasses at Falcon after the show.
More coverage from all the parties later on Sunday night.