Paul Rudd risked overexposure this week by appearing at two movie premieres in one week. But with two markedly different films, he did not wear out his welcome in Hollywood just yet. What did, however: the term bromance, heard about a billion times on the red carpet of “I Love You, Man,” his comedy with Jason Segel about man dates and bodily functions. A slew of other funny dudes, including Andy Samberg, Jack Black, Jason Bateman, Ben and Jerry Stiller and Jon Favreau yukked it up on the red carpet at the Mann’s Village Theater on St. Patty’s Day before settling in for the screening. 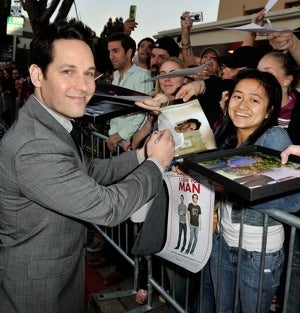 At the “Monsters vs. Aliens” premiere on Sunday, Rudd helped serenade birthday girl Reese Witherspoon with castmates Amy Poehler, Will Arnett, Kiefer Sutherland, Seth Rogen, Hugh Laurie and Rainn Wilson, who called the surprise, which included a cake, “an intervention.” The audience, which included Brad Grey, Jeffrey Katzenberg and Sumner Redstone, joined in singing a raucous round of “Happy Birthday” inside Universal’s Gibson Amphitheater.

Decidedly more low-key: the premiere of Sony Pictures Classic’ film “Sugar” about a Dominican pitcher trying to make the big time. Ryan Gosling co-hosted the event at the Pacific Designer Center on Wednesday night to support filmmakers Anna Boden and Ryan Fleck, who worked with him on “Half Nelson.” Also in attendance: Cuba Gooding Jr., Kate Bosworth, Channing Tatum, Jessica Alba, and Sundance Film Festival’s John Cooper. After the screening of the film, which showed at Sundance last year, guests noshed on hot dogs, pretzels, and warm cookies straight from food carts to drive home the baseball theme.

For those who heard the piercing screams in Hollywood on Friday night, not to worry. Those came from “Twillight” fans outside a midnight DVD release event at Hot Topic. Clearly all you have to do is utter Robert Pattinson’s name to elicit that level of frenzy. Because he never even showed up, nor did Kristen Stewart. Consolation prize Ashley Greene, however, did. 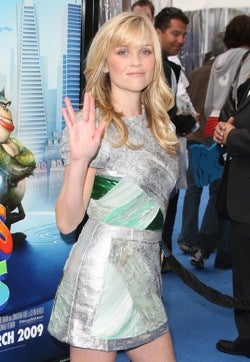 The next day, Fergie got about 350 fans all riled up at Nordstrom at the Grove as she showed off her cheap-chic shoe collection. Admirers came bearing gifts, including a burlesque doll version of the singer, which veered toward the unsettling, and an early birthday cake in the shape of a monkey. Meanwhile, a few doors down, Annalynn McCord promoted Victoria’s Secret new beauty product, Naturally, with Shannen Doherty before hitting the 90210 wrap party at West Hollywood’s Coco De Ville.

Finally, L.A. Fashion Week marched on, albeit with a whimper, since the breakup between IMG,Mercedes Benz and Smashbox Studios. On Thursday night, Rachel Griffiths hosted an Evening of 20th Century Glamour, benefiting MOCA, at the Geffen Contemporary at MOCA. Vintage couture designs from Cameron Silver’s shop, Decades, marched down the runway. Fashionistas, including Liz Goldwyn, Marisa Tomei and Nicole Richie, also got a peek at Louis Verdad’s new Louver collection along with a video installation about the designer, who was once the toast of L.A .Fashion Week.

Earlier that day, another one-time staple at Smashbox Studios, Kevan Hall, showed his heroine-inspired collection at the Beverly Wilshire Hotel as part of the annual Colleagues Luncheon. While the event’s honorary chairwoman, Nancy Reagan, was a no-show, Angie Harmon, Molly Sims and Virginia Madsen tried their best to fill the void at the affair, which benefited anti-violence nonprofit organization, the Children’s Institute.