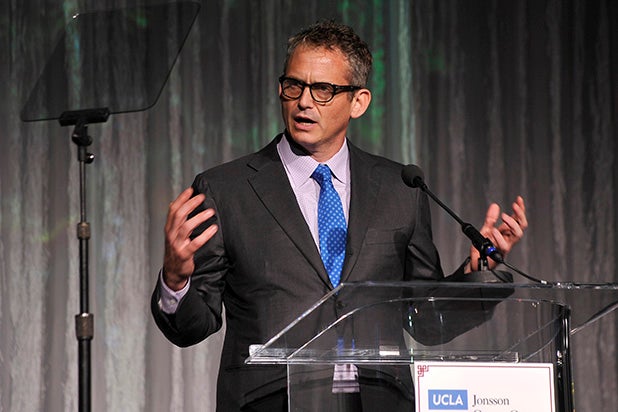 Paul Telegdy is out as NBC Entertainment chairman amid an investigation into multiple accusations of workplace misbehavior. His exit comes as part of a larger reorganization under Mark Lazarus, NBCUniversal’s chairman of television and streaming.

Peacock chief Matt Strauss will be in charge of the Direct-to-Consumer unit, while continuing to lead Peacock, which will maintain its own separate team within the division. International Networks, run by Ken Bettsteller, and Fandango, run by Paul Yanover, will report to Strauss. Francis Berwick will head up the Entertainment Business unit, which will be in charge of programming strategy and content spend across all of NBCU’s networks. Berwick most recently ran NBCU’s lifestyle networks. The Entertainment Programming unit have oversight of all original programming on the broadcast and cable networks; NBCU is currently searching for an executive to run this division.

The restructure effectively merges the NBC broadcast network’s operations with the rest of the company’s cable networks. NBC Sports will continue to be led by Pete Bevacqua. Telemundo Enterprises will remain separate under new chief Beau Ferrari.

“We have an unparalleled portfolio that is now in an even stronger position to drive growth for the business. With the power of NBC and the broadcast model, coupled with the strong cable entertainment brands and the new addition of Peacock, we have massive scale and a deep library of valuable content that can live across platforms,” said Lazarus. “We are incredibly fortunate to have some of the most talented executives in the industry leading the charge and am confident that we are poised to win in this competitive landscape.”

The move is the second major reorganization since Jeff Shell took over as CEO of NBCU in January. In May, NBCU re-organized under Shell, placing Mark Lazarus in charge of all entertainment television — including Peacock, which launched earlier this year. Under the reorg, Matt Strauss continued to lead the day-to-day operations at the streaming service as its general manager.

For Telegdy, this ends his two-year run leading NBC Entertainment and a 12-year run overall with the company, where he was the longtime head of the alternative programming unit.

Telegdy and former NBCU exec George Cheeks took over NBC Entertainment following the departure of Bob Greenblatt. Telegdy had been running the division solo since October. Cheeks has since moved on to head up CBS under ViacomCBS.

In a bombshell report on July 31 by the The Hollywood Reporter, Telegdy was accused of numerous transgressions including mocking gay executives to their faces, using homophobic and misogynistic slurs and making disparaging comments about others’ physical appearance. Telegdy and alternative chief Meredith Ahr were both accused of creating a “terrible, even traumatizing experience” in the reality division. The story added that Telegdy had bad relationships with “SNL” boss Lorne Michaels and uber-producer Dick Wolf.

NBCU launched an investigation into Telegdy’s behavior shortly after, which is still ongoing. No decision has been made regarding Ahr at this point.

Telegdy becomes the latest executive in a few-week span to lose his job over alleged bad behavior. Peter Lenkov, one of CBS’ most prolific showrunners, was fired following an investigation into multiple accusations that he created a toxic work environment; ABC News let go longtime executive Barbara Fedida over making  “racially insensitive comments” and “managed in a rough manner.” Hearst Magazines president Troy Young resigned amid accusations that he made lewd and sexist remarks to his employees.