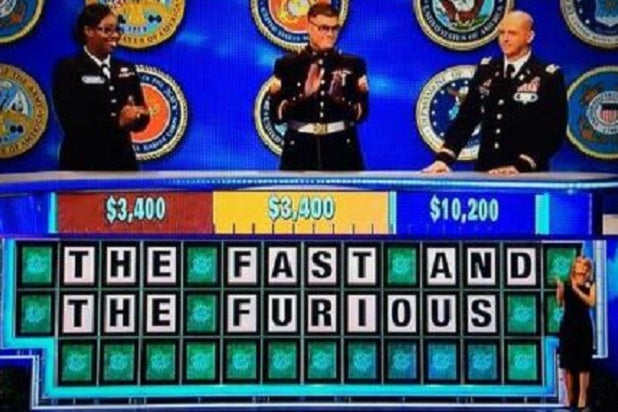 We’d like to solve the puzzle, Pat: Extremely Bad Timing.

Long-running game show “Wheel of Fortune” was left scrambling to explain itself on Monday, after an episode featured a puzzle with the solution “The Fast and the Furious” — just days after “Fast and Furious” star Paul Walker‘s death in a fiery car wreck at age 40.

The show took to its Twitter account Monday night to explain that the episode had taped in early October, and that its airing Monday night was “an unfortunate coincidence.”

“The show that included the puzzle ‘The Fast and The Furious’ was taped on 10/4/13. It’s an unfortunate coincidence that it aired tonight,” a tweet posted Monday night read.

“The hearts of everyone at Wheel of Fortune go out to the family, friends & fans of Paul Walker,” the show added.

“Wheel of Fortune” host Pat Sajak also weighed in via Twitter, addig that he felt “terrible” about the incident.

Walker died on Saturday, when a Porsche driven by his friend and business associate, Roger Rodas, crashed following a charity event in Santa Clarita, Calif.

Autopsies for Walker and Rodas are taking place Tuesday.