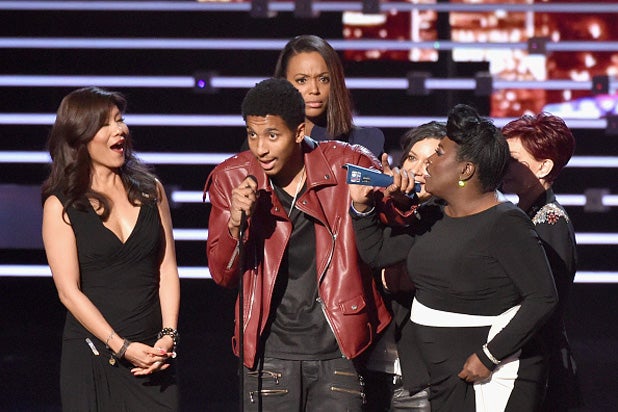 The women of “The Talk” were momentarily at a loss for words when a random intruder stormed the stage at the People’s Choice Awards Wednesday night during their acceptance speech for Favorite Daytime TV Hosting Team.

Wearing a red leather jacket and black jeans, the unwanted guest grabbed the mic from co-host Sara Gilbert while she thanked fans who had voted for the show. While his message was rushed and mumbled, the aspiring singer was clearly trying to plug his new album.

Luckily, Sharon Osbourne was at hand and delivered a swift kick to his ass, as Julie Chen, Sheryl Underwood and Aisha Tyler all combined forces to push him off stage.

Without missing a beat, Gilbert continued her acceptance speech by explaining how the women all feel like they are “a motley crew of misfits.”

“But that guy is not in our club,” Tyler added.

Some weird dude grabbed the mic while the hosts of @TheTalkCBS were giving their acceptance speech! #PCAs https://t.co/PVugcnvq0b

The ladies of @TheTalkCBS aren't going to let anyone hijack their acceptance speech! #PCAs pic.twitter.com/4HvFR3m0r1

See what fan favorites wore to the show at the Microsoft Theater in Los Angeles, California