PETA is accused of barking up the wrong tree for staging a protest outside the Hollywood premiere of bull rider-themed “The Longest Ride.”

Hours before the film’s Monday premiere got underway, PETA announced it would carry signs and chant “real men don’t hurt animals” outside the TCL Chinese Theatre.

“The rodeo is a disgusting show in which pathetic people bully terrified animals who are simply trying to escape their abusers,” PETA (People for the Ethical Treatment of Animals) claimed in a statement on Monday morning.

But 20th Century Fox and the Professional Bull Riders (PBR) organization both fired back, accusing the animal rights group of serious inaccuracies in its criticism of the film.

“These bulls are treated like rock stars and we don’t do anything to mistreat them in any way. Any time you give exposure to our great athletes, then PETA is going to get involved. I am just surprised by how misinformed they are,” PBR chairman and CEO Jim Haworth told TheWrap. 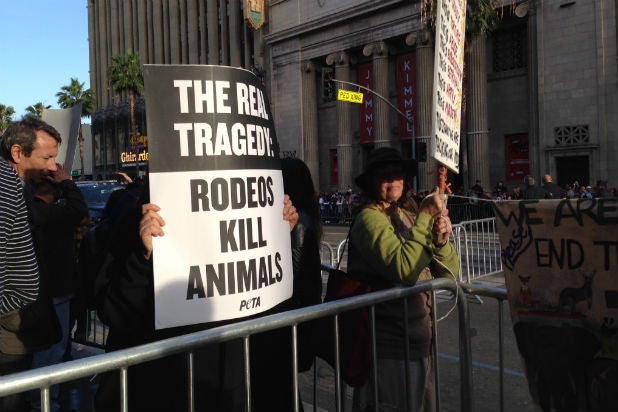 PETA Foundation deputy general counsel Delcianna Winders went on to say, “ should stick to long-lost lovers kissing in the rain, because there’s nothing romantic about violence to animals.” Winders added, “The rodeo is a disgusting show in which pathetic people bully terrified animals who are simply trying to escape their abusers.”

Haworth called bull on that assessment too. “It is not accurate. We do not do anything to probe or prod the bulls, we have rules against that. These bulls are very important to us,” he said.

A spokesperson for 20th Century Fox agreed that PETA appeared to be confused, telling TheWrap “rodeos” are not depicted in the “The Longest Ride,” adding there is a “big distinction” between professional bull riding events and rodeos.

In addition, Fox said the scenes involving animals were overseen by the American Humane Association and representatives were on set for all the bull riding scenes, which were filmed in North Carolina.

Also Read: ‘Blackfish’ Star on Tell-All Book’s Shocking Claims About SeaWorld and Its Legal Threats Against Him

The studio maintains that the PBR has an industry-leading animal welfare policy, and bucking bulls are actually genetically predisposed to perform, not prodded by negative stimulation.

“The Longest Ride,” a 20th Century Fox release, stars Scott Eastwood as a bull rider who captures the heart of Britt Robertson at an event. Alan Alda, Jack Huston and Oona Chaplin co-star.

The film, based on a novel by Nicholas Sparks, hits theaters Friday.