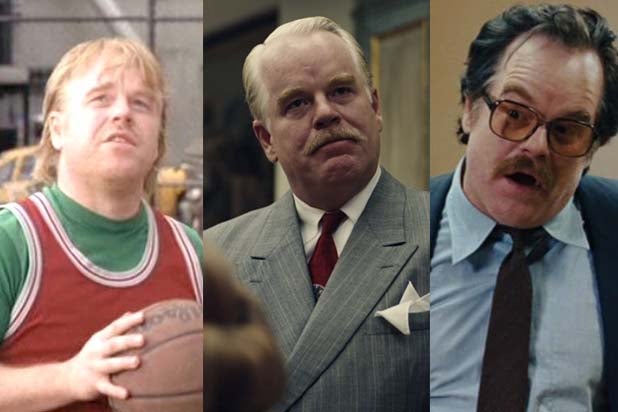 Philip Seymour Hoffman died of an apparent overdose on Sunday, and left behind a Hollywood legacy highlighted by just one Oscar, but dozens of other memorable roles and moments captured on camera.

The 46-year-old actor won his statue for playing author Truman Capote, and was nominated three other times, most recently last year for his performance in “The Master.”

From his time as Ben Stiller‘s hilarious sidekick in “Along Came Polly,” to Scotty J. in “Boogie Nights” and creepy Allen in “Happiness,” here are 10 of Hoffman’s finest movie moments:

Sandy Lyle, “Along Came Polly”
Not only did Hoffman coin the term “shart” in this 2004 comedy, he was comedy MVP in one of the greatest games of basketball ever filmed.

Brandt, “The Big Lebowski”
His performance as Jeffrey Lebowski’s passive, brown-nosing personal assistant not only demonstrates his early comedic chops, it continues to remind fans of the Coen brothers’ cult classic that he had infinite range as an actor. Take a moment to enjoy this scene in which Brandt proudly showcases his horrible boss’s accomplishments, including the The Little Lebowski Urban Achievers.

Dean Trumbell, “Punch-Drunk Love”
Hoffman played a scumbag who isn’t afraid to tell an angry customer (Adam Sandler) to “calm down and shut the f–k up.” Even though the exchange is over the phone, Hoffman’s intensity makes it just as suspenseful as a face-to-face confrontation. This is how to respond to a customer complaint, people.

Scotty J., “Boogie Nights”
There’s nothing more awkward to watch than a character expressing feelings for another that aren’t reciprocated. Hoffman’s character making a drunken move on Dirk Diggler (Mark Wahlberg) in Paul Thomas Anderson’s 1997 drama is about as awkward as it gets. Thanks to the self-loathing pain Hoffman brought to the role, the scene was also heartbreaking to watch.

Andy, “Before the Devil Knows Your Dead”
All of the actors in Sidney Lumet’s last film were at the top of their game, but there is, perhaps, no better scene for Hoffman than when his heroin-addicted character raids his drug dealer’s apartment for cash with his brother (Ethan Hawke) by his side.

Owen Davian, “Mission: Impossible III”
Hoffman played one of the baddest bad guys Tom Cruise has ever encountered in J.J. Abrams’ installment of the secret agent franchise. In one of the 2006 blockbuster’s most intense scenes, sadist arms dealer Davian gives Cruise’s Ethan Hunt 10 seconds to come up with the information he needs, or his girlfriend (Michelle Monaghan) gets a bullet to the head. Cruise may have the most dialogue, but it’s Hoffman’s cold, callous and unpredictable demeanor that really sells the scene’s suspense.

Lester Bangs, “Almost Famous”
Hoffman shines on screen on the phone yet again in this heartwarming scene where his character reminds a high schooler and aspiring Rolling Stone journalist (Patrick Fugit) that there’s nothing wrong with remembering he’s “uncool,” and it’s actually essential for his job. Writer-director Cameron Crowe called the quiet moment between the two the “soul of the movie.”

Gust Avrakotos, “Charlie Wilson’s War”
Hoffman received his second Oscar nomination for his turn as a CIA Agent who isn’t afraid to break his boss’s office window to prove a point, and one of his finest moments in the movie comes just before he shatters glass for the second time.

Lancaster Dodd, “The Master”
Hoffman’s final Oscar nomination honored his riveting portrayal of a charismatic cult leader, and one of the best scenes in the film was when a skeptic confronted Dodd’s beliefs in front of his followers.