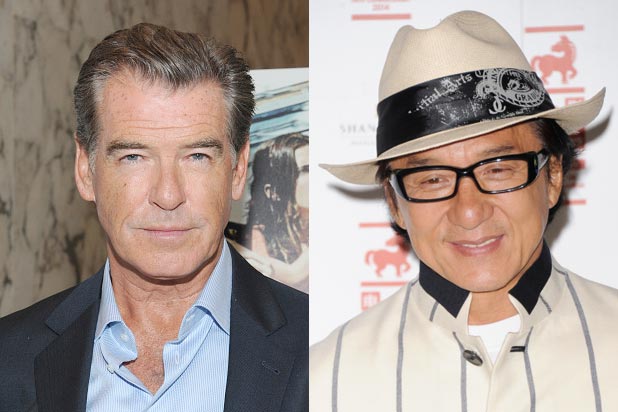 Two of the world’s most famous action heroes are joining forces, as Pierce Brosnan is set to star opposite Jackie Chan in an untitled action thriller that Martin Campbell will direct for STX Entertainment and SR Media Corporation, TheWrap has learned.

Chan stars as a humble restaurant owner in London’s Chinatown. When the justice system fails him, he is forced to push his moral and physical boundaries to track down the group of rogue Irish terrorists responsible for the death of his beloved daughter.

STX Entertainment and Beijing-based SR Media Corporation are co-financing the film, which will be produced by Wayne Marc Godfrey and Arthur Sarkissian. It was formerly known as “The Foreigner.”

In the ’90s, Brosnan reinvigorated the popularity of James Bond with blockbusters such as “Goldeneye,” “Tomorrow Never Dies,” “The World Is Not Enough” and “Die Another Day.” More recently, he starred in “No Escape” with Owen Wilson; “The Moon and the Sun” with William Hurt; “Survivor” with Milla Jovovich; and “How to Make Love Like an Englishman” with Salma Hayek, Jessica Alba and Malcolm McDowell.

Brosnan is also a prolific producer whose company with Beau St. Clair, Irish DreamTime, has produced 10 films to date including “The November Man,” “The Matador” and “The Thomas Crown Affair.”

Brosnan is represented by CAA, the Lisa Richards Agency and Hansen, Jacobson.