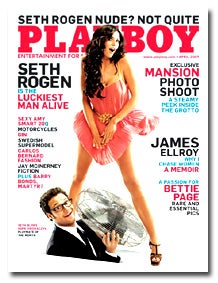 The media industry’s bloodied and battered financial reports continue to roll in. The latest, Playboy, which said today that its second quarter 2009 revenues were $62.2 million, down 15.3 percent from $73.4 million during the second quarter last year.

Revenues from the print group – the one that includes its flagship magazine – were $28.3 million in the quarter, down $3.9 million.

Cust-cutting moves helped, but not enough. Playboy spent $9.1 million to close its New York offices during the period.

The company said it expects Playboy to be hit with a 47 percent decline in ad pages in the third quarter — in part, the result of being forced to publish one fewer issue this year. (That, on top of the 30 percent slide in ad pages Playboy took during the first half of the year.)

"I’m not convinced that the magazine must be a money loser,” Flanders, not exactly sounding like George S. Patton, said during a conference call to discuss the earnings report. “We can and will do a better job on that front."

While PlayboyTV is not “our major brand-driver,” he said, it can certainly be a “profit-generator.”

“There is an audience for sexy, fun entertainment for adults,” Flanders said. “And I believe we can grow and compete successfully in that market.”

The company said Playboy’s licensing group — which includes branded energy drinks and boutique hotels — plans to roll out new products, including a branded “body spray” and nutraceuticals, by year end. Development of a 40,000-square-foot Playboy Mansion Macao was pushed back to 2011, but boutique gaming venues in Mexico and South Beach are in the works, the company said. Revenues for its licensing group were down 14 percent in Q2.

Flanders, meanwhile, is optimistic, if incredibly vague, about Playboy’s digital future: “I have not yet determined how we will operate in any of these (new) businesses, but I am confident that the model will be different and more profitable than we’ve seen in the past.”

When asked if there were plans to fold Playboy magazine into the company’s licensing division, he said: “No actions are off the table, but any speculation on my part would be premature.”