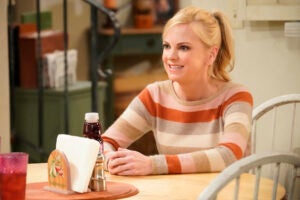 Will ‘Mom’ Remain a Ratings Hit After Anna Faris Divorced Herself From CBS’ Current Longest-Running Sitcom?

”Any other media company would kill for a 15% increase in revenue this year,“ Cumulus Media chief analyst Pierre Bouvard tells TheWrap

More businesses and brands are placing advertisements on podcasts than five months ago, a sign that the industry is not only growing, but is virtually pandemic-proof.

A new study from Cumulus-owned media network Westwood One found the average number of ads placed on podcasts is up 9% compared to April of this year. The number of individual companies placing ads on podcasts — what Westwood One classifies as unique advertisers — is up 10% in that same time period.

Westwood One conducted the survey with commercial analysis firm Magellan AI, which employs tech to listen to the ads for every podcast published in America, every day, and analyzes data from those advertisers.

Westwood One chief insights officer Pierre Bouvard told TheWrap that advertisers are converging on podcasts partly because there is a lack of other digital programming to buy ads against. Bouvard also noted that, more importantly to advertisers, there is increasing data proving that podcast ads actually work — and that they are worth the higher cost of entry.

“There’s no lack of digital companies happy to take your money but the real secret of podcast ads is a lot of the ads are host read,” Bouvard said. “This is one of the few ad mediums where the star, the host, naturally pivots and endorses the product or service. According to the Magellan data, the majority of ads tend to be host read and people have an affinity for the host.”

The study published Sept. 3 found that the number of unique advertisers and overall ads placed dropped in April, following a record number of ads placed in March, but quickly rebounded. “Podcast advertising is pandemic-proof,” Bouvard wrote.

“In May, the number of unique advertisers in podcasting jumped back to March levels (and) in June, total podcast occurrences grew 8% versus April and the average number of ads per podcast reverted to pre-pandemic volumes.”

According to the International Advertising Bureau, the podcast industry is expected to grow its ad revenue 14.7% by the end of this year. That is a revised estimate from a pre-pandemic prediction of 29.6% growth — but still quite an achievement compared to legacy film and television media, most of which continues to post losses.

“We’re not going to see a 30-40% increase” this year, Bouvard said, “but any other media company would kill for a 15% increase in revenue this year.”

In 2019, the total podcast ad market raked in $708 million, and the IAB estimates that by 2021 the podcast advertising market will crack the $1 billion revenue ceiling for the first time.

Fewer ads interrupting content is easier on the ears, but it doesn’t mean that the ad market is hurting. In fact, the cost per thousand impressions of a podcast ad (CPM) averages in the $20 range, Bouvard said, “triple network TV” prices.

Podcast CPMs remain expensive partly because there is not a lot of supply for the ads, Bouvard said, but also because the brand or direct response marketer is paying to get a personality endorsement. What’s more, the host doing the product pitch will likely question the company pitching the ad and need to spend time with the product in order to give a genuine-feeling review.

“It’s not just them reading a script. Actually, to be truly authentic, they need to be using the product and then telling stories about their experiences,” Bouvard said. “From a creative standpoint, it’s a bigger ask (and) for a number of reasons the CPMs are pricier, but advertisers will tell you it’s definitely worth it, no question.”

Host-read ads contributed 66% of the podcast industry’s overall advertising revenue last year, according to the IAB. That figure is only expected to grow as more brands and big businesses embrace the podcast ad space.

While podcast advertising has been around for over a decade, big-box brands are hesitant to pay the high cost of entry without proof their ads will work. Traditionally, it was startups marketing direct-to-consumer goods, like Santa Monica-based Dollar Shave Club, that had the best experience placing podcast ads which could generate tangible sales from promotional codes. But firms like Geico and State Farm recently started buying podcast ads, Bouvard noted, a sign that the industry is opening up.

Podcasting has yet to gain its own dedicated industry-wide standard for measurement, like Nielsen, but Bouvard said that a rise in groups like the IAB, Magellan or Toronto-based Signal Hill Insights tracking advertising data is beginning to persuade larger companies to place their bets.

“That was the objection from non-brand clients, they said, ‘can you prove to me that this stuff works,'” Bouvard said. “What brands want is attribution, a third party measurement company to prove to them that they’ve been able to advertise in podcasts and they grew their awareness, or image association.”