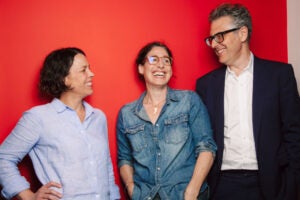 Inside Podcast Sexism: Why Female Hosts Struggle to Crack the Top 20 Charts

“I’ve heard some women say, ‘I just like listening to men better because they don’t have vocal fry,'” podcaster Kristen Meinzer says

For a relatively new medium, podcasts seem to have fallen prey to the same old problems with dismal representation for female voices we see in more traditional media — and insiders point to pervasive sexism both within the industry as well as the audience for the gender imbalance.

“Men early on were given the tools and occupying the space and monopolizing the dialogue around what podcasts were,” said Kristen Meinzer, co-host of the self-help sendup podcast “By the Book” and author of the 2019 book “So You Want to Start a Podcast.” “The people who have been writing about the space have historically been straight men, too. When it’s dominated by men and when the critics are men, you’re going to see men celebrated the most.”

The results are hard to deny when looking at the podcasts with the biggest audiences. In an analysis of the top-charting shows across the four major podcast platforms over 31 days this summer, TheWrap found that nearly 80% had a male host. Just 23 of the 109 shows that appeared on one or more of the charts on Apple, Google, Stitcher and Spotify were hosted by women, while 15 had co-ed hosts.

Female podcast hosts attribute the gender inequity to many factors  — including classification on podcast hosting apps, sexist online criticism and even audience resistance to female voices.

The problem often starts with classification of podcasts by networks as “niche” shows, which several hosts said can inhibit female-run shows from growing visibility.

Cristen Conger, who co-hosts the Stitcher podcast “Unladylike” with former reporter Caroline Ervin, said shows made by women aren’t exposed to as many listeners when they’re not put in the right category alongside popular male-led shows. “In the ways that lots of female-hosted shows are categorized in podcast apps or podcast award categories, there’s still some marginalization that happens within the taxonomy of always ending up in an umbrella of ‘lifestyle,’ which could mean so many different things,” Conger said. “We still have not wrapped our heads around the idea that women-hosted shows can be for everyone.”

“It has to do with the ways shows ‘for women’ are treated versus general-interest shows,” Ervin said. “The idea of shows that are hosted by women and that focus on women’s lives and gender issues as ‘lifestyle’ topics and being ‘niche interest’ topics is still a surprisingly stubborn idea that has stuck around.”

Spotify wouldn’t comment on how it categorizes its podcasts, but Ervin and Conger said they didn’t know how to challenge their show’s classification. Stitcher and Google Podcasts did not respond to TheWrap’s request for comment on how it classifies shows. A person familiar with Apple’s charts said podcast hosts choose from three possible categories, but said the show will only chart in whichever primary category the hosts select.

Michael Bosstick, who runs the podcast network Dear Media with business partner Raina Penchansky, said Dear Media has been producing female-focused content since 2018, but its shows cover a wide range of topics.

“When we say female-focused, we’re really just targeting amplifying female voices on the network and connecting with audience members,” he said, adding that Dear Media counts roughly 6 million monthly listeners across its 40 shows.

Also Read: How the Music Industry Looks to Survive Without a $26 Billion Live Concert Business 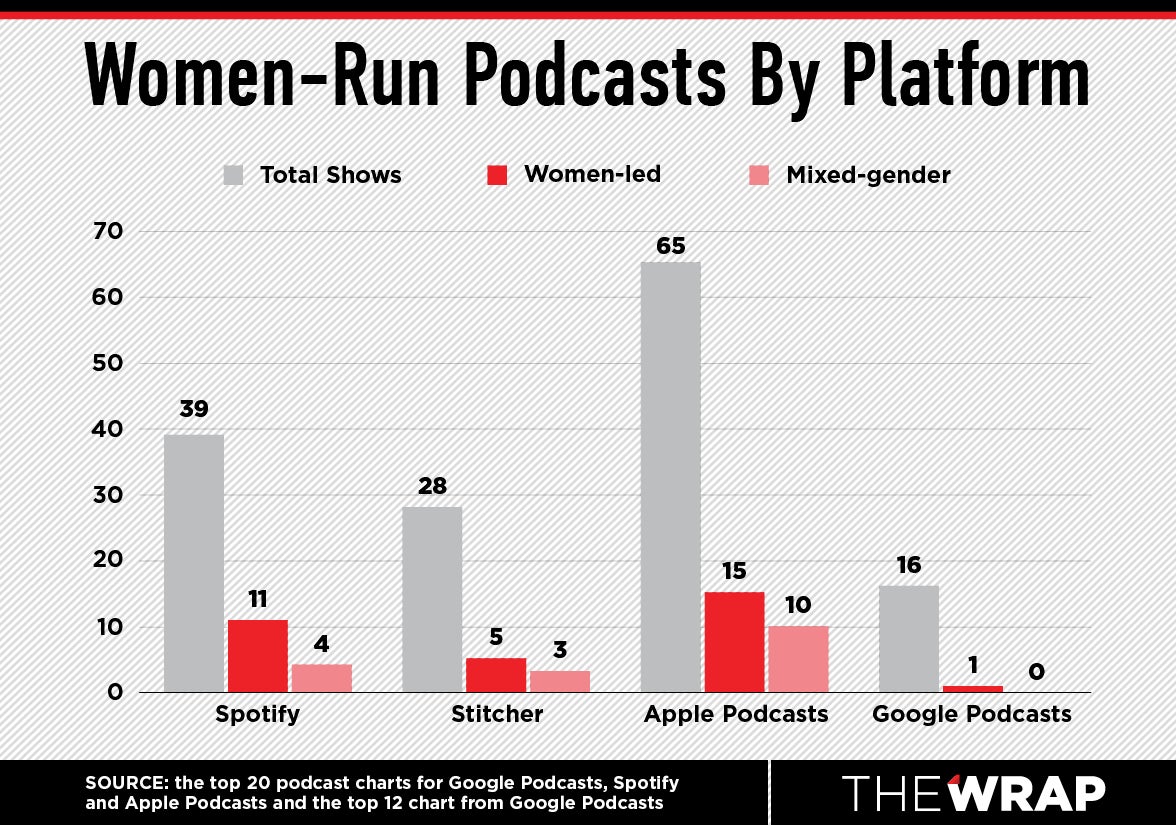 Women in the podcast world also face criticism that their male counterparts do not — about their very voices. Each of the six female hosts interviewed by TheWrap said they were rebuked for the sound of their voices and accused of either having “vocal fry” or being too “shrill.”

And the sniping doesn’t just come from guys. “I’ve heard some women say, ‘I just like listening to men better because they don’t have vocal fry.’ And (that) they find certain women hosts not as trustworthy as men or not as authoritative,” Meinzer said. “Even though there are almost as many women listeners as men listeners, women have all come to be within the same culture, which is sexist.”

Jolenta Greenberg, Meinzer’s “By the Book” co-host, added, “Based on what vocal fry is anatomy-wise, Ira Glass clearly also does, but no one’s saying that’s why they can’t bear to listen to his stories.”

Radio producer and podcast host Manoush Zomorodi has worked in radio for 25 years and now hosts the “TED Radio Hour” program for NPR. “Fresh Air,” NPR’s daily interview show hosted by Terry Gross, was NPR’s only female-led podcast to chart on Apple Podcasts’ top 20though the daily news roundup podcast “Up First” regularly charted and has a number of different hosts, both men and women, including Rachel Martin and Noel King.

Despite her experience, Zomorodi found herself tweeting to her followers asking for positive reviews. “I hate asking this. But here goes. Friends, a few listeners have written Apple Podcasts reviews complaining about my ‘nasal’ voice on TED Radio Hour,” Zomorodi wrote on July 14. “If you’re OK with how I sound, can you do me/all female hosts a solid by adding your thoughts?” she asked, linking to the review page for her show.

Zomorodi told TheWrap she was surprised by the complaints and noted she typically doesn’t hear that type of criticism. She attributed the negative feedback, in part, to the fact that she recently took over “The TED Radio Hour” from Guy Raz, who left in early March. “It was super awkward to ask, ‘Hey, will you tell people you like my voice?’ but this is the game we play and it’s my turn at the racket,” she said. “I can only come to it from a place of compassion and empathy and think, I am so sorry that you didn’t have women in your life who express themselves and that you’re not used to hearing what a woman sounds like expressing their opinions or asking intellectually curious questions.”

Women can face double standards for their content as well. Comedic shows run by women frequently face criticisms that male-led shows do not. Reviews of “By the Book” and Karen Kilgariff and Georgia Hardstark’s comedic true-crime show “My Favorite Murder” often call out the shows for cursing, though the same can’t be said of top male-led shows like comedian Marc Maron’s “WTF” or SirusXM’s “Howard Stern Show,” that are equally (if not more) profane.

One recent review of “My Favorite Murder” on Apple Podcasts complained that the show had “too many f-bombs,” while another reviewer commented, “I tried again to listen to an episode but I cant stand your story telling potty mouths.”

As Jolenta Greenberg said, “We don’t have the same sort of listening standards put on us” as men do.

Still, there can be advantages to attracting a female audience. Bosstick said women tend to be more loyal listeners and are more likely to buy products associated with the brand or engage with it on social platforms. “From a talent standpoint, there’s amazing talent that has built what I would say is some of the strongest on digital platforms, much stronger than what many of these men have created,” he said.

Ervin and Conger of “Unladylike” both said they have seen the gender divide improve slightly in the decade they’ve been podcasting professionally. “When we launched ‘Stuff Mom Never Told You’ back in 2009, the gulf was even larger in terms of the absence of just female-hosted shows,” Conger said. “I think that the gender gap is narrowing.”

Also Read: SAG-AFTRA Has Laid Off Over 100 Employees Since Start of Pandemic

Many female hosts called for more outreach to women who might want to become hosts.

“What I found was there is this hunger for women who wanted to (podcast) but didn’t necessarily know what the barrier to entry was to the space,” Penchansky said. “When we were able to talk to them about it and allow them the resources to do it, it was an exciting opportunity.”

“Networks need to have more women in charge of their content arms,” Meinzer said. “We need more women at the top, (and) we need to be recruiting and mentoring more women.”

This is the second of a two-part look at male dominance of podcasts. On Monday: Podcast Boys Club: Only 21% of Top-Charting Shows Have a Female Host.