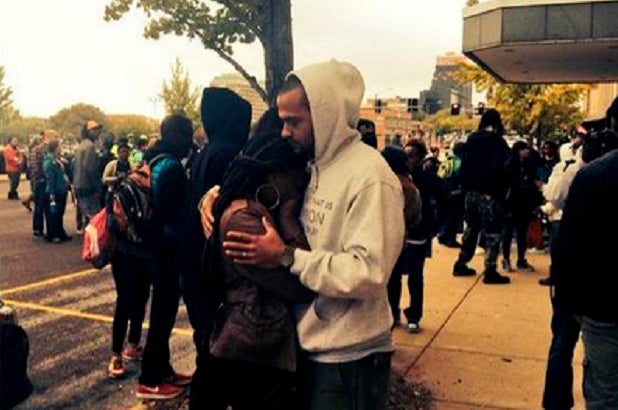 Just a day after “Grey’s Anatomy” star Jesse Williams blasted police over its treatment of protesters during “Ferguson October” in Missouri, the St. Louis Metropolitan Police Department has fired back at the actor’s accusations of brutality.

In an exclusive interview published Thursday on TheWrap, Williams described his experience on the scene at the Ferguson protests last weekend. The actor accused police of creating a “plantation vibe” of racism, needless violence, antagonism, verbal abuse and stretching the truth — including in a tweet from police chief Sam Dotson about a disturbance at the QuikTrip gas station at Vandeventer & Chouteau that he claims was exaggerated.

However, the SLMPD stands by Dotson’s description of “protestors attempting to storm” the store.

“The QuikTrip, which is normally a business open 24/7 had to close early due to protesters. Several employees were inside the business, and we have reports of family members of the employees calling police in fear of their loved ones’ safety,” police said in a statement to TheWrap, referring to news a story from KTVI Channel 2 saying “a woman who identified herself as a mother of a worker called our newsroom frantic and worried about her son.”

But Williams’ version is very different. “I was there. They weren’t storming the QuikTrip … they were sitting down,” he said.

The actor also claimed that police in St. Louis and Ferguson were far from welcoming to the protesters who traveled there from as far as California and New York.

“There was an antagonistic, instigatory nature to the police behavior … Several times, just people walking around, not even in massive protest, just walking on the street, police shining lights in their faces, antagonizing them, snickering at them, laughing, taunting them, yelling at them to ‘go home,'” he said.

The police statement from police countered that, too, saying: “Chief Dotson advises he did not witness any of this behavior. Officers showed great restraint and professionalism during the protests.”

According to local media reports, police in riot gear used pepper spray to disperse the crowd. Dotson announced 17 people had been arrested for unlawful assembly.

Williams traveled to Missouri on Oct. 11 and spent three days taking part in protests dubbed “Ferguson October” and “Weekend of Resistance” in response to the August shooting death of teenager Michael Brown.

“The cops were really, really nasty, unnecessarily antagonizing people,” the actor told TheWrap. “It really creates a kind of plantation vibe — with people patrolling and literally in waves, beating their baton sticks against their hands, like they’re ready to deliver an ass whooping and enjoying it.”

The October gatherings stretched about 12 miles from Ferguson to the Shaw neighborhood of St. Louis, with protesters demanding that Darren Wilson, the police officer who killed unarmed African-American teenager Brown, be charged with a crime.

Brown, 18, was fatally shot Aug. 9 by a white officer, later identified as Wilson. The Ferguson Police Department said Wilson stopped Brown because the teen and a friend were walking in the middle of the street, and that Brown tried to steal the officer’s gun in an altercation that followed. However, several witnesses contradicted the official version of what happened, saying Wilson shot Brown as the teen surrendered with his hands up.

Williams concluded that despite the obvious tensions with police officers when he was in Missouri, there was also a sense of unity at the gatherings. “What I was really warmed by is the incredible outpouring of white and Asian and Latin supporters and protesters there,” he said.